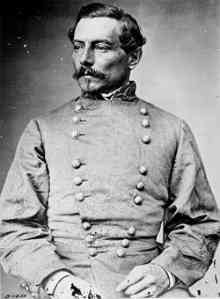 The services of "The Hero of Fort Sumter," Pierre G.T. Beauregard, were not utilized to their fullest due to bad blood between the Confederate general and Jefferson Davis. The native Louisianan had graduated second in the 1838 class at West Point. There he had become a great admirer of Napoleon and was nicknamed "The Little Napoleon." Posted to the artillery, he was transferred to the engineers a week later. As a staff officer with Winfield Scott in Mexico he won two brevets and was wounded at both Churubusco and Chapultepec. In the inter-war years he was engaged in clearing the Mississippi River of obstructions. In 1861 he served the shortest term ever-January 23-28 as superintendent at West Point. Southern leanings probably resulted in his prompt removal. On February 20, 1861, he resigned his captaincy in the engineers and offered his services to the South.

Placed in charge of the South Carolina troops in Charleston Harbor, he won the nearly bloodless victory at Fort Sumter. "The Little Creole" was hailed throughout the South. Ordered to Virginia, he commanded the forces opposite Washington and created the Confederate Army of the Potomac. Reinforced by Joseph E. Johnston and his Army of the Shenandoah, Beauregard was reduced to corps command under Johnston the day before 1st Bull Run. However, during the battle Beauregard, being familiar with the field, exercised tactical command while Johnston forwarded troops to the threatened left. Both officers later claimed that they could have taken the Union capital if they had been properly supplied with rations for their men. This was one of Beauregard's first conflicts with Davis. Nonetheless he was named a full general from the date of the battle and early in 1862 was sent to the West as Albert Sidney Johnston's second in command.

Utilizing Napoleonic style, he drafted the attack orders for Shiloh and took command when Johnston was mortally wounded on the first day of the battle. On the evening of the first day he let victory slip through his fingers by calling off the attacks. Controversy over his decision has raged to this day. The next day he was driven from the field by Grant's and Buell's combined armies. He was eventually forced to evacuate Corinth, Mississippi-his supply base in the face of Henry W. Halleck's overwhelming force. Shortly after that he went on sick leave without gaining Davis' permission; he was permanently relieved of his army and departmental commands on June 27, 1862, by special direction of the president.

Two months later he returned to the scene of his earlier triumph as commander along the Southern coast from the North Carolina-South Carolina line to the tip of Florida. He held this command for over a year and a half and was engaged in the determined defence of Charleston against naval and ground forces. Ordered north, he took command in North Carolina and southern Virginia while Lee faced Grant in northern Virginia. Gradually the two forces were pushed together in an awkward command arrangement.

Beauregard managed to bottle up Benjamin F. Butler in the Bermuda Hundred lines after defeating him at Drewry's Bluff. This was Beauregard's finest performance of the war. At this point he started making grandiose proposals for defeating both Butler and Grant and invading the North by taking a large part of Lee's army with him. This resulted in lengthy correspondence between the two commanders and the Richmond authorities. Beauregard also managed to thwart the early Union attempts to take Petersburg while Lee was still north of the James River. With the siege of the city under way, he continued to serve under Lee until September 1864 when he was assigned to overall command in the West with John B. Hood's Army of Tennessee and Richard Taylor's Department of Alabama, Mississippi and East Louisiana under him. With no forces under his immediate command he was powerless in trying to stop Sherman's March to the Sea.

In the final days of the war he was again second in command to Joseph E. Johnston, this time in North Carolina. Following the capitulation he returned to New Orleans and refused high rank in the Egyptian and Romanian armies. Engaged in railroading, his reputation was tarnished by his association with the Louisiana Lottery as a supervisor. For a time he was Louisiana's adjutant general, and he engaged in historical writing including his A Commentary on the Campaign and Battle of Manassas.