The American Civil War (1861-1865) was the first 'modern' war. It had a profound effect not only on the USA, but also on the course of subsequent European and World History. Vast numbers of Europeans, especially people from Britain were involved. The war had many firsts, including the first practical use of machine guns, repeating rifles, ironclad ships, modern trench systems, torpedoes, telegraphy, balloons, railroads, and photography.

The American Civil War Society offers the opportunity to experience living history in the form of re-enactments of battles, camps and events of the period.

Members represent individual units from the two sides. If wearing grey or brown the unit will be Confederate (Southern Rebels), while the dark blue uniforms represent the Federal or Union (Northern Yankees). As a general rule, red rank badges and piping on a uniform denote artillery, yellow is for cavalry, and pale blue is for the infantry, on both sides. Some units, however, had their own, different way of doing things, too! 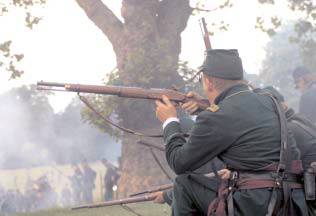 Members equip themselves with blank-firing black powder muskets and other authentic firearms, uniforms and equipment of the period. We also have batteries of real cannon on each side, each cannon emits a deafening roar and clouds of smoke when fired, whilst the opposing infantry and cavalry also blaze away at each other using the tactics and drills of the period. 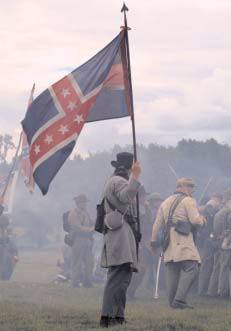 At our events, the re-enactment arena is roped off and members of the public are warned to keep out of the arena and to keep children and pets under control and behind the ropes or barriers. Our battles are noisy and we use explosive ground charges to simulate artillery fire. It is unsafe for a member of the public to enter our battlefield arena until after we have cleared the field at the end of an event.

The public is very welcome to come and talk to any members and to walk around the authentic tented camps both before and after our battle. 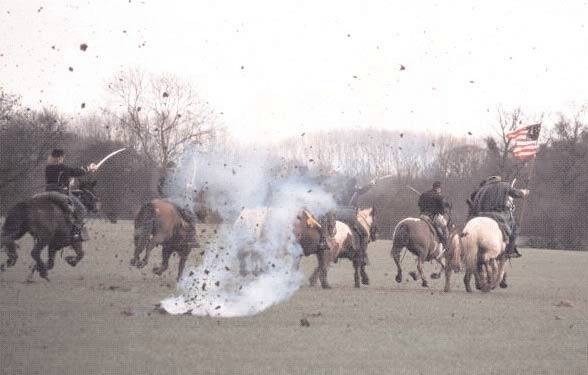