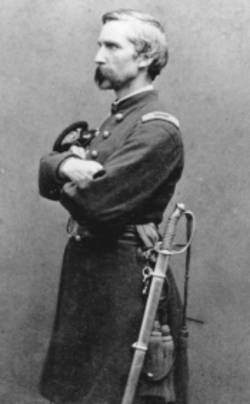 Joshua Lawrence Chamberlain was born Sept. 8, 1828, in Brewer, Maine, the eldest of five children. Facing the much larger city of Bangor across the Penobscot River, Brewer was in Chamberlain's youth a small farming and ship-building community. Lawrence -as his family called him -- worked on his father's farm and, like many other promising young men of the time, had some experience of teaching school.

Entering Bowdoin College in Brunswick in 1848, Chamberlain studied the traditional classical curriculum and showed particular skill at languages. He joined a "secret society," Alpha Delta Phi, and appears to have been a pious, serious minded youth -- he recalled, years later, visiting the Stowe family on Federal Street in 1851 and hearing Harriet Beecher Stowe read aloud from chapters she had just completed of Uncle Tom's Cabin. At First Parish Church, he met Fannie Adams, the adopted daughter of the minister; they were to marry in 1855, after a long courtship.

But first Chamberlain took his Bowdoin A. B . degree, in the Class of 1852, and returned north for three more years of study at Bangor Theological Seminary. Turning down the opportunity to become a minister or missionary, he accepted a position at Bowdoin teaching rhetoric (which combined elements of what we would now call speech with English literature and persuasive writing) and, later, modern languages (i.e., German and French). A good scholar, he was also an orthodox Congregationalist -- an important factor to his Bowdoin colleagues, for the College was embroiled in the denominational quarrels of the day.

Chamberlain knew little of soldiering -despite a short time as a boy at a military school at Ellsworth -- but he was keenly aware that his father had commanded troops in the bloodless Aroostook War of 1839 with Canada, his grandfather had been locally prominent in the War of 1812, and his great grandfathers had participated in the Revolution. When the sectional crisis led to civil war in 1861, Chamberlain felt a strong urge to fight to save the union. (Although sympathetic to the plight of the slaves, he is not known to have been an abolitionist and showed little interest, after the war, in the cause of the freedmen.) But the college was reluctant to lose his services. Offered a year's travel with pay in Europe in 1862 to study languages, Chamberlain instead volunteered his military services to Maine's governor. He was soon made lieutenant colonel of the 20th Maine Volunteer Infantry Regiment.

His extraordinary Civil War career is much admired today, thanks to books like John J. Pullen's The Twentieth Maine and Alice R. Trulock's biography In the Hands of Providence, documentaries like Ken Burns's The Civil War, and novels like Michael Shaara's The Killer Angels (which was made into the movie Gettysburg, with Jeff Daniels portraying Chamberlain). From Antietam in 1862 to the triumphal grand review of the armies in May of 1865, Chamberlain saw much of the war in the East, including 24 battles and numerous skirmishes. He was wounded six times -- once, almost fatally - and had six horses shot from under him.

He is best remembered for two great events: the action at Little Round Top, on the second day of Gettysburg (2 July 1863), when thenColonel Chamberlain and the 20th Maine held the extreme left flank of the Union line against a fierce rebel attack, and the surrender of Lee's Army of Northern Virginia at Appomattox, when Grant chose Chamberlain to receive the formal surrender of weapons and colours (12 April 1865). Always a chivalrous man, Chamberlain had his men salute the defeated Confederates as they marched by, evidence of his admiration of their valour and of Grant's wish to encourage the rebel armies still in the field to accept the peace.

Brevet Major General Chamberlain returned briefly to his academic duties at Bowdoin, but was soon elected as a popular war hero to four terms as governor of Maine -helping establish a century of domination of Maine politics by the Republican Party. Chamberlain was never a member of the inner circle of the party and was distrusted by its leading politicians, but in his years as chief executive he helped establish the new agricultural and technical college at Orono (eventually to grow into the University of Maine), tried to attract investment into a state whose economy was beginning to decline, and persuaded Scandinavian immigrants to take up farming at New Sweden and elsewhere in Maine. He continued to live in Brunswick, taking the train to Augusta as state business required.

Rather than go into finance or railroads like so many young Civil War generals, former Governor Chamberlain returned to Bowdoin; he was to spend far more of his life as an educator than as a soldier. In 1871, he was persuaded to accept the presidency of the college at a low point in its fortunes. Remembering the engineering skills of West Point-trained officers and trying to adjust to a new age, Chamberlain reshaped the curriculum to include modern scientific and engineering subjects -- a short-lived experiment that produced at least one very famous alumnus, the polar explorer Admiral Robert Peary, Class of 1877. Chamberlain's wartime experience had made him accustomed to giving orders and seeing them obeyed. This inflexibility in his character was less suited to civilian life, however, and led to the biggest defeat of his career -- at the hands of his students. Part of Chamberlain's reforms had included regular military drill in uniform. At first the students were intrigued; soon, they were openly hostile to what they saw as an attempt to change "old Bowdoin" into a military school. Chamberlain won the "Drill Rebellion of 1874" in the short run -- he threatened to expel the students unless they agreed to submit -- but he lost the support of the college's Governing Boards, and drill was soon eliminated. 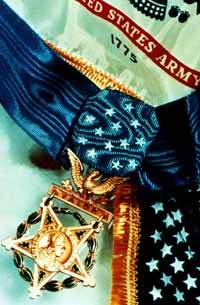 Throughout the 1870s and 1880s, he continued to write, teach, lecture, and participate actively in the G.A.R. and other veterans' groups. He represented the United States at the Paris Exposition of 1878 and wrote a long report on education in France. His reputation for coolness and courage was confirmed in 1880 when, as commander of the militia, he was called to keep order in Augusta amid an angrily disputed state election. Despite several operations, Chamberlain had never fully recovered from the wound in his groin he had received in 1864 at Petersburg (where a minie ball had pierced both hipbones), and in 1883 ill health led to his resignation as Bowdoin's president. In 1893 Congress finally gave him the Medal of Honor for gallantry at Gettysburg.

Chamberlain spent much of the final three decades of his life in business ventures (including speculation in Florida real estate) and in writing accounts of his battles. The Civil War to him was not the grim business of Sherman's memoirs or the battlefield photographs, but an idealized struggle where "manhood" -- by which he seemed to mean courage, steadfastness, and compassion -was put to the test and where an individual's fate was entirely in the hands of Providence. In more private moments, he enjoyed rusticating and sailing at his summer retreat, Domhegan, on Simpson's Point.

In 1905 Fannie Chamberlain died. Of their five children, two had survived to adulthood. In 1900 Chamberlain was appointed Surveyor of the Port of Portland, where he lived until his death in 1914 at age 85

The above article first appeared in the ACWS Newsletter, Summer 2007