The Wife and Influence Behind Jefferson Davis. 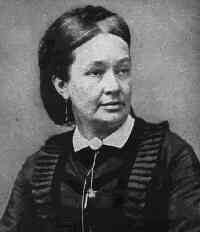 Varina was born at "The Briars," in Natchez, Mississippi on May 7, 1826, she married Jefferson Davis in 1845, she was his second wife, and His first wife had been the daughter of Zachary Taylor, who had died three months after their wedding.

Varina was a very religious woman, and very intelligent, who received little formal education; however, in her teens she did attend a finishing school where her social graces were enhanced. When she married Jefferson Davis at the age of nineteen, her mother objected, as Jefferson was eighteen years older than she. But, their married turned out to be a long and most happy one. Varina had a strong interest in politics; therefore her adjustment to the political life as the wife of a politician in Washington, D.C. was easy. She also was a consummate hostess, and an exuberant conversationalist and a story teller. Unlike her husband, she handled condemnation well, which was an asset through the tough years as the First Lady of the Confederacy. In 1862, when conditions in Richmond stated to deteriorate and food was becoming scarce, she found herself under public scrutiny for her entertaining at the White House of the Confederacy. Yet, others complained that her parties were not extravagant enough. Jefferson and Varina would have six children together, one of whom was born during the troubled times of the war, and another who died tragically.

At war's end, when Jefferson Davis was captured and arrested in Irwinsville, Georgia, Varina was with her husband. Upon his confinement at Fort Monroe, Virginia, Varina spent this time campaigning to free her husband.

These attempts being unrelenting, Jefferson was finally released in May 1867.

The Davises lived in Canada for a short while, in virtual poverty, until the early 1870s, when a friend arranged for them to purchase the Mississippi estate known as "Beauvoir." They retired here, and following Jefferson's death in 1889, Varina remained to write her memoirs.

Varina eventually moved to New York City, and gave Beauvoir to the state of Mississippi to be used as a Confederate veteran's home. While in New York, she supported herself by continuing to write articles for various magazines. Varina Davis died in New York City on October 16, 1905. Sadly, she was survived by only one of her six children.

The above article first appeared in the ACWS Newsletter, Spring 2010