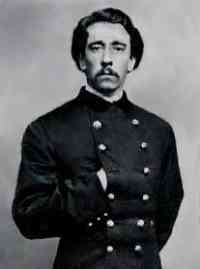 Gen. Elisha Hunt Rhodes. Among the gallant citizens of Rhode Island who served in the late civil war, is the present collector of U. S. internal revenue for the district of Rhode Island, Gen. Elisha H. Rhodes. He was born in Pawtuxet, March 21, 1842. His father, Elisha H. Rhodes, was a seacaptain, as were his ancestors for several generations, and was lost at sea Dec. 10, 1858, while in command of the schooner "Worcester" of Providence. The subject of this sketch was educated in the public schools, and at Potter & Hammond's Commercial Academy in Providence. Enlisting in the Union Army, as a member of the 2nd R. I. Vols., early in May, 1861, he took part in the first battle, July 21st of that year. He was successively promoted through the various company grades, having, as First Lieutenant, for a time command of Company B, which position he held until Nov. 7, 1863, when he became Adjutant of the regiment.

During all this time, as indeed in all its history, the gallant 2nd regiment was actively engaged in service. On the plains and hills of East Virginia, on the Peninsula, before Richmond, and in checking Lee's invasion of Pennsylvania, he saw severe and protracted service. Reenlisting, with the patriotic purpose of seeing the war through, his efficient labours were rewarded by a further promotion. As senior officer on duty, he took command of the regiment June 5, 1864, and was promoted to Captain, his commission dating May 5, 1864. Having reorganized the regiment, and being assigned to its command by Major General Wright, of the 6th Army Corps, he took an active part in Gen. Sheridan's Shenandoah campaign, and was breveted Major, " for gallant conduct at Winchester." He returned to Petersburg in December, 1864, was promoted to Lieutenant Colonel Jan. 31, 1865, was breveted Colonel of U. S. Vols., "for gallant conduct at the charge on the rebel works at Petersburg," received full commission as Colonel July 18, 1865, and ten days later was honourably discharged, having served four years and two months, and participating in every campaign of the Army of the Potomac, from the first battle of Bull Run to Appomattox.

Since the war, Gen. Rhodes has received many military honours. He was Adjutant of Prescott Post, No. I, in 1867, Commander of the post the next year, Assistant Adjutant General of the Department of Rhode Island in 1871, Commander of the department in 1872-3, member of the National Encampment in 1874-5, senior Vice Commander-in-Chief of G. A. R. in 1877, and Vice President of the Army of the Potomac the same year, and President of the Second Rhode Island Volunteer Association. He has also been President of the Rhode Island Soldiers' and Sailors' Historical Society since its formation, in 1873, and in 1879 was Vice President of the 6th Army Corps Association. On the re-organization of the Rhode Island militia, in that year, he was unanimously elected Brigadier General. He received the appointment to his present position, as Collector of U. S. internal revenue of Rhode Island, in 1875. He married, June 12, 1866, Caroline P., daughter of Joshua Hunt, of Providence. Gen. Rhodes has prepared papers on historical and biographical subjects upon several occasions, and takes an active interest in civil, social and religious affairs.

The above article appeared in the ACWS Newsletter, Autumn 2010