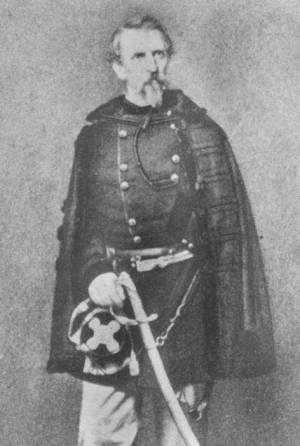 Kearny was born in New York, June 2nd, 1815 and after his mother died when he was 9, he spent his childhood and youth with his maternal grandfather, a man of wealth and high social position. Kearny's uncle, Gen. Stephen Watts Kearny, was a US dragoon and Philip favoured a military life, but his grandfather, who had lost all his sons, persuaded him to go to Columbia University. After graduating in 1833, Kearny travelled widely. When his grandfather died, leaving him a million dollars, he returned home and in 1837 obtained a commission as 2nd Lieutenant in the 1st US Dragoons. After 2 years service with them, the secretary of war sent him to the French Cavalry School at Saumur to study cavalry tactics. While there, Kearny saw action in Algiers, serving with the Chasseurs d'Afrique. On his return to the US, he served as aide-de-camp to, successively, Alexander Macomb and Winfield Scott, generals-in-chief of the army. In the Mexican War, Kearny accompanied Scott to Mexico City and at Churubusco was wounded so severely that his left arm had to be amputated. He was brevetted major for gallantry and, after service in California, resigned from the army, married, and made his home in New Jersey. The military attracted him again in 1859, when he served in Napoleon III's Imperial Guard in the Italian War, winning the French Legion of Honour for bravery at Solferino. When the Civil War started, Kearny was appointed brigadier general of volunteers, commanding a brigade of New Jersey regiments in Brig. Gen. William B Franklin's division. One of the best known and respected soldiers in the army, he distinguished himself during the Peninsula Campaign, rising to major general to command of the 1st Division of Maj. Gen. Samuel P Heitzelman's III Corps. After Second Bull Run, he accidentally rode into the enemy lines during the indecisive Battle of Chantilly, 1 September 1862, and was killed instantly. He was buried in Trinity Churchyard in New York City but was later moved to the National Cemetery at Arlington, Va. The New Jersey town in which he had resided was renamed Kearny in his honour.

The above article first appeared in the ACWS Newsletter, December 2001