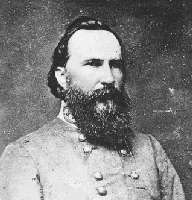 James Longstreet was one of Robert E Lee's most able lieutenants during the American Civil War. However, his post-war career was controversial, at least in the South. He became a Republican and friend of U.S. Grant. However, perhaps his worst offence in some eyes was that on occasion he had disagreed with Lee, and been correct to do so.

James Longstreet was born in South Carolina, and raised in Georgia. He did not excel at West Point. He graduated 54th out of 62 in his class in 1842, below William Rosecrans, D.H. Hill and Earl Van Dorn. U.S. Grant, in the year below, became a close friend - Longstreet was present at Grant's wedding. After West Point he was brevetted second lieutenant of the 4th Infantry. During the Mexican War he served under Zachary Taylor, taking part in the battle of Monterey, then joined Scott on the expedition to Mexico City. He was wounded at the battle of Chapultepec, and promoted to brevet major.

Longstreet remaining in the army between the Mexican War and the start of the civil war, reaching the rank of major in 1858. He resigned from the US. Army on 1 June 1861, and on 17 June was appointed a brigadier-general in the newly formed Confederate army.

Most of his subsequent military career was spend in Virginia.

He was promoted to major-general on 17 October, partly as a reward for his performance at 1st Bull Run. When McClellan launched the Peninsula campaign of 1862, Longstreet's division was one of the units moved to Yorktown. At Williamsburg (5 May 1862) he was in command of the rear guard that helped hold off the Union advance for a day, thus allowing the Confederate army to reach the defences of Richmond.

Throughout his career Longstreet was prone to move slowly but hit hard when he arrived. This did lead to the danger that his arrival would be too late. His performance during the battle of Severn Pines or Fair Oaks (31 May- 1 June 1862) was not good - he moved his troops along the wrong road on 31 May, delaying the start of the main attack.

Seven Pines also saw Robert E. Lee promoted to command the Confederate armies in Virginia after Joseph Johnston was wounded. The partnership between Lee and Longstreet began well. During the Seven Days? Battles Longstreet performed much better than his much vaunted colleague "Stonewall Jackson", who for one moved slower than Longstreet.

Jackson soon recovered his speed as he moved against General John Pope's army in northern Virginia. While McClellan was slowly retreating from the Peninsula, Lee was free to turn north to help Jackson. On 13 August Lee detached more than half of his infantry from the army around Richmond, and dispatched it north to join Jackson, under Longstreet's command. This time Longstreet was meant to move fairly slowly, to make sure that his troops were ready to fight when they found the enemy. On 29 August Longstreet and his men reached the Confederate positions at Bull Run. The next day Longstreet launched the attack that almost away Pope's army (2nd Bull Run 28-29 Aug) Longstreet did not share Lee's belief in the value of an invasion of the North. He was not keen on the invasion of Maryland, and events proved him correct. At Antietam (17 September 1962) Longstreet's men fought well, and Longstreet earned a promotion to lieutenant-general (11 October 1862). With it came command of the I Corps. It was this unit that did the bulk of the fighting at Fredericksburg (13 December 1862), although given the appalling lack of intelligence in the Union attack this victory hardly required any great skill on Longstreet's part.

The events of 1863 demonstrate some Lee and Longstreet's flaws. Early in the year Longstreet was sent to south east Virginia, to guard the supply routes into Richmond. There he found himself facing an equal number of Federal troops, very rare for any Confederate commander. However, Longstreet was not the man to launch an attack on his own initiative. Lee now demonstrated one of his great failing - he did not like to give direct orders to his subordinates, considering it to be wrong to give orders to gentlemen. Instead he suggested that Longstreet would be best to either attack the Federal troops south east of Richmond, or rejoin the main Confederate army. Longstreet did neither, and so missed the battle of Chancellorsville with two divisions.

Chancellorsville saw the death of Stonewall Jackson. This promoted Longstreet to the status of Lee's senior lieutenant. Lee was now determined to launch his second invasion of the north. Longstreet was not opposed to the idea, but wanted it to be offensive in strategy, but defensive in tactics - he wanted Lee to manoeuvre the Union commander into a position where he would have to attack the Confederate army. Longstreet had become aware of the power of the defensive during the civil war rather more quickly than Lee, possibly because of his experience at Fredericksburg. Longstreet may well have been convinced that Lee had agreed to this.

Gettysburg proved that Lee had agreed to no such idea. Longstreet now demonstrated his own greatest weakness. If he agreed with a plan he could implement it as well as any of Lee's generals, but if he disagreed with that plan then he could slow to a crawl. On the second day at Gettysburg Longstreet was under orders to attack Cemetery Ridge as during the morning (not at dawn). In the end the attack went in late in the afternoon. When Longstreet did launch his attack, he discovered that the Union line was further advanced than expected, and all he could do was force the line back to Cemetery Ridge. Even if he had attacked in the morning there is no guarantee that his attack would have succeeded.

Pickett's Charge is probably the most controversial incident in Lee's career. The Union position on Cemetery Ridge was now stronger than it had been on the previous day. Any attack directly up the ridge would surely result in many useless casualties, as had the Union attacks at Fredericksburg. Longstreet certainly though so, telling Lee that "there never was a body of fifteen thousand men who could make that attack". Longstreet was right. Pickett's charge was a disaster. Pic k ett's men s uffer ed 7,000 casualties from a force of 13,500 men and achieved nothing. This time Longstreet was not to blame. His greatest mistake here was to have publicly disagreed with Lee, to have later repeated that disagreement in print, and worse of all to be right.

The Confederacy had one more chance to achieve a great victory after Gettysburg, and Longstreet was partly responsible for it. While Lee had been launching his invasion of Pennsylvania, further west Union forces had been advancing on Chattanooga. After a series of carefully prepared advances across the summer of 1863, on 9 September General Rosecrans's army entered the key Confederate rail junction. On the same day, despite Lee's strenuous efforts to prevent it, Longstreet with two divisions was dispatched from the Army of Northern Virginia to reinforce Braxton Brag, now south of Chattanooga.

Longstreet's men began to reach Bragg on 18 September. The next day Bragg launched his counterattack at Chickamauga (19-20 September 1863). The first day of the battle saw a series of poorly coordinated Confederate attacks on the Union line. That evening Longstreet reached the battlefield. It is a sign of the regard with which he was held by his fellow Confederate generals that in the middle of a battle Bragg reorganised the structure of his army, giving the newly arrived Longstreet command of the left wing.

The next day Longstreet proved that Bragg had been correct to do so. Bragg's original plan had been for his right wing under Leonidas Polk to begin the attack. Longstreet would then attack a weakened Union line. Polk's attack went in late, and did not achieve everything that Bragg had hoped for. However, when Longstreet did make his attack he had a great stroke of luck. He had decided to make a strong attack on a small part of the Union line, and had formed his eight brigades into three lines. This strong column marched straight into a temporary gap in the Union line, formed when one unit was moved to block a non-existent gap in the line. Rosecrans and half of his army fled back to Chattanooga in the rout. Only the resistance of General George Thomas on the left prevented a total disaster.

The Confederate triumph soon turned sour. Bragg decided not to attack Rosecrans at Chattanooga, but instead settled down for a siege. This allowed the Union to rush reinforcements to the city. U.S. Grant was appointed to command in the west, and was soon in Chattanooga himself. Meanwhile outside the city Bragg was arguing with all of his subordinates. The situation had got so bad that President Davis had been forced to visit the siege camp. His visit did little to help the situation around Chattanooga.

One of his suggestions was that Longstreet should be sent north east, to recapture Knoxville, the main city in east Tennessee. Bragg had dispatched some troops in that direction during October. Finally, at the start of November Longstreet joined them. He did not perform particularly well in east Tennessee. The Federal commander, Ambrose Burnside, was able to pull his troops back into Knoxville. Longstreet began his own siege on 19 November. On 29 November he attempted a direct assault on the lines around Knoxville and was repulsed. On 4 December, with a Federal relief force under Sherman approaching, Longstreet was forced to abandon the siege, and retreat north east, towards Virginia. Longstreet spent the next four months in East Tennessee. He and his troops returned to Virginia in April 1864, just in time to play a crucial role at the Battle of the Wilderness (4-7 May 1864)

On 6 May a strong Union attack came close to crushing Lee's left wing, and almost captured Lee himself. In the nick of time Longstreet's fresh troops arrived on the battlefield, pushed back the Union attack, and quite probably saved Lee from capture.

The battle of the Wilderness was the last battle at which Lee's army was able to manoeuvre with its normal skill. After that the fighting in Virginia settled into a grim pattern of attritional warfare, as Grant slowly worked his way towards Richmond and Petersburg. Longstreet missing much of this fighting, having been wounded at the Wilderness. He returned to service in November, just in time to participate in the final Confederate collapse. He was present on the final retreat to Appomattox Court House, where his knowledge of Grant played a part in persuading Lee that he would get fair terms.

Longstreet has been one target of the "lost cause" myth. It was him, and not Lee, that lost Gettysburg, and therefore the entire civil war. Avoiding any ques tions on whether a Confederate victory at Gettysburg would have actually won them the war or not, this is rather unfair on Longstreet.

He was a capable corps commander, possibly slow moving, but whose attacks hit hard Pickett's Charge was entirely Lee's mistake.

Longstreet's second great mistake (after disagreeing with Lee at Gettysburg) was to become a Republican after the war. Some of his post-war writing was also eccentric - in Battles and Leaders of the Civil War he suggested that even a Confederate victory would not have led to permanent secession. He expressed the view that the south had to accept that it had lost the war, and work towards reconstruction within the framework of the law, which made him unpopular with more radical exConfederates. During U.S. Grant's presidency, Longstreet was appointed to several Federal posts, including surveyor of Customs in New Orleans, United States marshal for Georgia and minister resident to Turkey. By the time of his death in 1904 he was the last survivor of the Confederate high command.

The above article first appeared in the ACWS Newsletter, Autumn 2009