Charles Kuhn Prioleau
The Man who Bankrolled the Confederacy 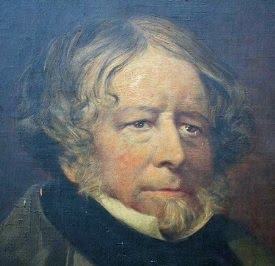 In 2009, a history lecturer called Tom Sebrell from Queen Mary, University of London and a group of his students literally stumbled over a broken headstone in an overgrown part of the Kemsal Green Cemetery in London. Armed with only secateurs and a map of the old burial records, they had re-discovered one of the almost forgotten stories of the American Civil War. They had unearthed the mortal remains of the man who masterminded Confederate support in the United Kingdom which involved the highest ranks of both the British and Confederate Governments in terms of both politics, finance and society. His name was Charles Kuhn Prioleau.

Charles Kuhn Prioleau was a cotton merchant born in Charleston, South Carolina. He lived in Liverpool, UK throughout the American Civil War. He was the manager and partner at Fraser Trenholm and Company, 10 Abercromby Square, Liverpool and became the mastermind of Confederate interests in the UK. During the Civil War, he also became a naturalised British citizen so he could be of better use to the Confederacy and as a consequence of his pivotal role the whole banking of the Confederacy in Europe operated from Liverpool

At the outbreak of the Civil War, almost 60% of the South`s cotton was coming through Liverpool to feed the Lancashire cotton mills. His war efforts therefore began as an attempt to save his business when the cotton trade, crucial to the Southern States and the Lancashire cotton mill owners, collapsed. His invaluable contribution to the Confederate cause grew by purchasing and transporting supplies, weapons, ammunition and other ancillary goods all so desperately required by the Confederacy. He was also involved in buying, equipping and crewing warships as well as blockade runners. Prior to the siege of Fort Sumter, Charles Prioleau personally arranged for a Blakely rifled cannon to be sent to Charleston. Over the years, it was rumoured that this cannon fired the first shot of the American Civil War but this is credibly disputed as the first shots were known to have been fired from shore batteries. Through agents, he acquired 3 of the most notorious privateers of the American Civil War namely the CSS Alabama and CSS Florida both built on Merseyside and the CSS Shenandoah, built on Tyneside. The CSS Alabama, with mainly a British crew, caused such havoc that the British Government later paid the US Government over £3.3 million known as the "Alabama Claim".

Charles Prioleau married a local girl, Mary Elizabeth Wright, in 1860 at Walton Church, Liverpool who was acknowledged as the "Belle of the City" at the time. She organised several bazaars including the "Great Southern Bazaar" in the iconic St George`s Hall, Liverpool, with all the proceeds to go Southern wounded. She raised a total of £20,000 pounds which was a massive amount at the time.

Following the American Civil War, Charles Prioleau set up business in London, UK. This was due to the defeat of the Confederacy and the imminent bankruptcy of his firm in Liverpool by impending compensation claims from the US Government. He took with him some old records and many personal letters but business records, accounts, ledgers, cash books and contracts were all believed to have been hastily destroyed. The surviving personal material he took with him including letters, telegrams, cheque book stubs, vessel specifications, correspondence re small arms, bills, receipts, legal documents, codebooks and personal letter-books however is now recognised as being of great historical importance and it has been published on microfilm as Civil War and Confederacy : The Business Records of Fraser, Trenholm and Company of Liverpool and Charleston, South Carolina, 1860-1877 by Adam Matthew Publications, 8 Oxford Street, Marlborough, Wiltshire, SN8 1AP.

After working for Fraser, Trenholm and Co in London for a time, he simply disappeared. No-one knew where he went. He had descendants in England, Africa and the United States but no-one knew where he lived in later life and was subsequently buried. However, Tom Sebrell and his team had a lead and he was recently rediscovered in the Kensal Green Cemetery in London. He has some illustrious neighbours in the Cemetery including Isambard Kingdom Brunel, Lady Byron, (the poet`s wife), the novelist Anthony Trollope and WH Smith (Newsagent`s fame). During the Civil War, he lived at 2 houses in Liverpool namely 19 Abercrombie Square which is still standing with its multitude of painted Southern murals, emblems as well as South Carolinian devices including Bonnie Blue Flags, Gasden Palmetto Trees, Crescents, Stars and Magnolia leaves and portraits of both himself and his wife. This magnificently preserved building is now owned by the University of Liverpool. He also lived at the famous Allerton Hall, Liverpool.

The above article appeared in the ACWS Newsletter, February 2015