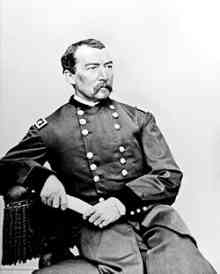 Philip Sheridan ranks with Ulysses S. Grant and William T. Sherman as one of the three great Union commanders of the American Civil War. Of the three he was the only one who devoted his whole life to the United States Army.

Philip Henry Sheridan was born in Albany, N.Y. His parents had settled there after emigrating from Ireland. Soon after his birth the family moved to Perry County, Ohio. The Mexican War prompted Sheridan to become a soldier. He secured an appointment to the United States Military Academy at West Point, N.Y., graduating from there in 1853.

Sheridan was a first lieutenant when the American Civil War began. Distinguished service brought him rapid promotions. When Grant took command of the United States Army in 1864, he gave Sheridan command of the cavalry of the Army of the Potomac. During the Wilderness campaign of 1864 Sheridan aided Grant by destroying Confederate lines of communication.

In July 1864 a strong Confederate force under Jubal Early drove the Federal Army from the Shenandoah Valley in north western Virginia. Sheridan was given command of the area. He defeated Early at Winchester and again at Fisher's Hill, driving the Confederates back to Staunton. These victories won for Sheridan a commission as brigadier general.

On the morning of October 19, Early counterattacked at Cedar Creek and drove the Federal force back in confusion. At that time Sheridan was returning from a conference in Washington D.C. Reaching Winchester, 20 miles (32 kilometres) away, he learned of the turn of events. Speedily he rode forward and reorganized the Union troops. At 3 PM his forces attacked and drove the Confederates 30 miles (48 kilometres) up the valley. For this Sheridan was made a major general and received the thanks of Congress.

In March 1865 Sheridan rejoined the Army of the Potomac. At Five Forks he entrapped and routed George Edward Pickett's troops, causing the Confederates to abandon Petersburg. When Gen. Robert E. Lee started to retreat, Sheridan's cavalry blocked the Confederate escape route at Appomattox Court House. This forced Lee to surrender.

After the war Sheridan was placed in command in the Southwest near the Mexican border. Later he headed the Department of Missouri, with headquarters in Chicago. During the great Chicago fire of 1871, Sheridan's troops helped maintain order in the city.

In 1870 Sheridan served as the American military observer with the Prussian army in the Franco-Prussian War. In 1884 he succeeded Sherman as general in chief of the United States Army. He received the rank of general a few months before his death. Sheridan died on Aug. 5, 1888, in Nonquitt, Mass.