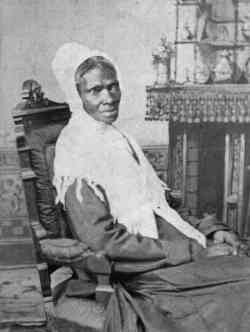 Born Isabella Baumfree, Sojourner Truth was one of the earliest and most passionate of female abolitionists-for she herself had once been a slave. In the 1820s, when still quite a young woman, she escaped from her New York owner after being brutally treated and sold away from her family. By the 1840s, Truth had become a powerful speaker against slavery, often moving her audiences to tears and exclamations of horror with her firsthand accounts of what many of her black brethren and sisters were enduring at the hands of cruel masters. She would tell listeners of how some slaves were kept cowed and afraid to act by beatings, sometimes with spiked sticks and chains; she herself, as a teenager, had been taken into the barn by her master one afternoon for absolutely no reason and tied up by the wrists. Then he tore the shirt from her back and whipped her with a bundle of sticks until her back bled. In a voice contemporaries described as rich and deep, she described how she refused to give him the satisfaction of screaming, by clenching her fists so hard her fingernails drew blood from her palms.

She also spoke of the living conditions many slaves were forced to endure, crowded together into cabins with no privacy, overworked, fed scraps in many cases, and clothed in threadbare hand-medowns. Her audiences must have felt the shame as Truth recalled the auction block, upon which men and women alike were frequently forced to strip and stand before potential buyers, who would search their bodies for marks of the whip or of wrist or leg irons, the presence of which would indicate the slave had been frequently punished. The slaves would be forced to endure impersonal and degrading inspections of their teeth, muscles, and other body parts, depending on what the buyer was looking for in the purchase.

Truth was self-educated, and much of her speaking bore the stamp of a deep love of and acquaintance with Scripture. When explaining to Harriet Beecher Stowe how she came to change her name, Truth said she felt God had called her "to travel up and down the land, showing the people their sins and being a sign unto them." She also possessed a quick wit, coupled with an ability to think fast and turn the unkind words of others against them. Facing a heckler once who told her he did not care for her anti-slavery talk anymore than he would for the bite of a flea, Truth retorted, "Perhaps not, but Lord willing I'll keep you scratching."

She was very involved in political causes, and strongly supported suffrage. During the Civil War, she gathered supplies for black volunteer regiments, and, in tribute to her efforts, was received at the White House by President Lincoln in 1864. Truth was appointed to the National Freedman's Relief Association in 1864, where she worked diligently to better conditions for African-Americans.

She lived long enough to see her people brought to freedom, but never stopped in her efforts to win more equality for them. Right up until her death, in Battle Creek, Michigan, she continued to speak out for her race; when she died in 1883, she went to her grave a much lamented and beloved figure in abolitionist lore.