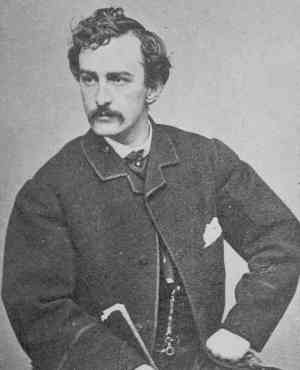 John Wilkes Booth was the ninth of ten children born to the famous, eccentric, and hard-drinking actor, Junius Booth. The Booth family--along with their slaves--lived on a farm near Bel Air, Maryland.

Booth made his own stage debut at age seventeen in Baltimore, appearing in Richard III. His highly successful acting career for a Shakespearian company based in Richmond took him all over the United States. (On November 9, 1863, Abraham Lincoln watched Booth play Raphael in the play Marble Heart in the same box at Ford's Theatre that he would later be assassinated.)

Booth became politically active in the 1850s, joining the Know-Nothing Party, an organization devoted to reducing the stream of immigrants into the United States. Booth ardently supported the institution of slavery and in 1859 joined a Virginia company that aided in the capture of John Brown after his raid at Harper's Ferry. Booth was an eyewitness to Brown's execution.

During the Civil War, Booth worked as a Confederate secret agent. He met frequently with the heads of the Secret Service, Jacob Thompson and Clement Clay, in Montreal.

In the summer of 1864, Booth began formulating plans to kidnap Abraham Lincoln. The plan called for Lincoln to be taken south to Richmond, where he would be held until exchanged for Confederate prisoners-of-war. Booth recruited friends and known southernsympathizers for his mission, including the eight persons tried before the 1865 military commission. Some who resisted his persuasive efforts, such as actor Samuel Chester, became key government witnesses in the trial.

On March 15, Booth and his most of his fellow conspirators met at a Restaurant three blocks from Ford's Theatre to plan their abduction of the President. Soon thereafter, Booth heard that the President would be attending a matinee performance of Still Waters Run Deep on March 17 at the Campbell Hospital on the outskirts of Washington. This, he decided, would the perfect opportunity for a kidnapping and--according to John Surratt--Booth developed a plan to intercept Lincoln's carriage enroute to the play. Booth's plans were foiled, however, when the President changed his plans and decided instead to speak to the 140th Indiana Regiment and present a captured flag.

Booth then turned to plan to kidnap the President at a future performance at Ford's Theatre, where the actor had several friends, but the plan failed to win the support of some of his coconspirators, who dismissed it as infeasible.

On April 14, 1865, after the fall of Richmond rendered moot his kidnap scheme, Booth set in motion his final plan--one of assassination. Booth may have made the decision to kill the President after hearing Lincoln deliver a speech urging Negro suffrage, according to Booth's former friend, Louis Weichmann. Weichmann spoke of his viewing of the President's speech with Booth:

"I had never seen Mr. Lincoln up close and I knew he was a tall man, however nothing could have prepared me for the sight of him. A long shadow did he have. And his arms, when at his sides, touched near his knees. Very professionally he said that there would never be any suffrage based on differences in the way people look. Upon this, Booth turned to the two of us and said, "That means nigger citizenship. Now by God I'll put him through!"

Booth tried to convince several of his co-conspirators to participate in his plot to kill several high government officials ( including the Vice President, the Secretary of State, and probably General Grant), but found few willing. 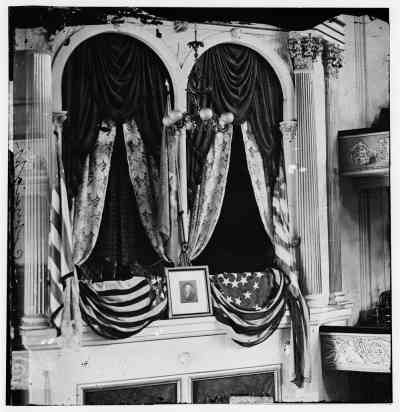 Around 10:15, as the President and the First Lady watched a performance of Our American Cousin at Ford's Theatre, Booth, showed a card to a presidential aide and was allowed entry through a lobby door leading to the presidential box. Reaching the box, Booth pushed open the door. The President sat in his armchair, one hand on the railing and the other holding to the side a flag that decorated the box, in order to gain a better view of a person in the orchestra. From a distance of about four feet behind Lincoln, Booth fired a bullet into the President's brain as he shouted "Revenge for the South!" (according to one witness) or "Freedom!" (according to another). Major Rathbone, seated with the President in the State Box, sprang up to grab the assassin, but Booth wrested himself away after slashing the general with a large knife. Booth rushed to the front of the box as Rathbone reached for him again, catching some of his clothes as Booth leapt over the railing. Rathbone's grab was enough to cause Booth to fall roughly on the stage below, where he badly fractured his leg.

Rising from the stage, Booth shouted "Sic semper tyrannus!" and ran across the stage and toward the back of the theatre. Booth rushed out the back door of the theatre to a horse being held for him by Joseph Burroughs (better known as "Peanuts"). Booth mounted the horse and swept rapidly down an alley, then to the left toward F Street--and disappeared into the Washington darkness.

Near the banks of the Rappahannock River in Virginia, investigators closed in on Booth and his companion, David Herodl, on April 26. Everton Conger and two other investigators pulled Willie Jett out of a bed in a hotel in Bowling Green to demand, "Where are the two men who came with you across the river?" Jett knew that Conger meant Booth and Herold. When Jett had talked with the two conspirators they had made no effort to hide their identity. Herold had boldly declared, "We are the assassinators of the President. Yonder is J. Wilkes Booth, the man who killed Lincoln." Jett told Conger that the men they sought "are on the road to Port Royal" at the home of "Mr. Garrett's."

Reaching Garrett's farm, the government party ordered an old man, Garrett, out of his home and asked, "Where are the two men who stopped here at your house?" "Gone to the woods," Garrett answered. Unsatisfied with Garrett's response, Conger told one of his men, "Bring me a lariat rope here, and I will put that man up to the top of one of those locust trees." One of his sons broke in, "Don't hurt the old man; he is scared; I will tell you where the men are--...in the barn." 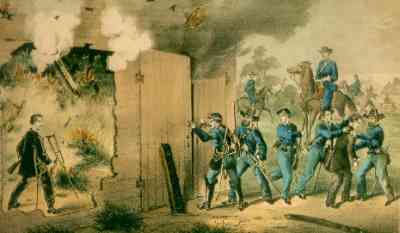 Finding the suspects to be in the Garrett barn, Conger gave Booth and Herold five minutes to get out or, he said, he would set fire to it. Booth responded, "Let us have a little time to consider it." After some discussion in the barn, Booth proposed that if the capturing party were withdrawn "one hundred yards from the door, I will come out and fight you." When his proposal--and a second one for a withdrawal to fifty yards--was rejected, Booth said in a theatrical voice, "Well, my brave boys, prepare a stretcher for me." As Conger ordered pine boughs placed against the barn to start a fire, Booth announced, "There's a man who wants to come out." After being called "a damned coward" by his partner, David Herold stepped out of the door of the barn and into the hands of his capturers.

Conger lit the fire minutes later. With flames rising around him, Booth, carrying a carbine, started toward the door of the barn. A shot rang out from the gun of Sergeant Boston Corbett. Booth fell. Soldiers carried Booth out on the grass. Booth turned to Conger and said, "Tell mother I die for my country." Moved into Garrett's house, Booth revived somewhat. Repeatedly he begged of his captors, "Kill me, kill me." Booth again weakened. Two or three hours after being shot, he died.

The above article appeared in the ACWS Newsletter, Summer and Autumn 2010