Helena, Arkansas was one of the many towns along the line of the Mississippi occupied by Union forces during 1862. In the summer of 1863 Union occupation of Helena served two purposes. First, it helped to protect the supply line along the Mississippi to the troops besieging Vicksburg. Second, it provided a possible base for any attack on the state capitol, at Little Rock.

The Confederate commander west of the Mississippi was Edmund Kirby- Smith (since March 1863). He had replaced Lieutenant-General Theophilius H. Holmes, who had demoted to command the District of Arkansas. Together, they decided to launch an attack on the Federal garrison at Helena, partly to help relieve the pressure at Vicksburg, and partly to protect the Confederate position in Arkansas. 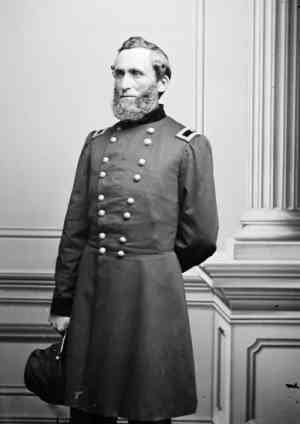 Their timing was good. The Union garrison at Helena had recently been reduced from 20,000 men to 4,000, under Major-General B. M. Prentiss, when most of the men had been transferred to Vicksburg. However, they did have a strong position. Helena was overlooked by a line of hills, on which they had built a series of forts (Fort Righter to the north, Graveyard Hill in the middle and Fort Hindman to the south). A single gunboat, the U.S.S. Tyler, protected them from the river.

Holmes had 7,000 men at his disposal. He planned a three-pronged attack. General Stirling Price, with 3,000 men, was to attack the Federal centre on Graveyard Hill. Generals John S. Marmaduke and L.M. Walker, with 2,780 men, were to attack Fort Righter and General James F. Fagan with 1,770 was to attack Fort Hindman.

The flank attacks were launched at daybreak on 4 July. Price's attack in the centre went in a little later. However, it was Price who met with the most success, capturing Graveyard Hill after a series of charges. With the flank attacks bogged down, all this achieved was to make Price's men the target for every gun in the Union army, as well as those on the Tyler. By 10.30 it was clear to Holmes that the attack had failed, and he ordered Price's men to pull back.

4 July 1863 was a bad day for the Confederacy. It saw the surrender of Vicksburg and Lee's retreat from Gettysburg. The defeat at Helena, while not in the same league, combined with the fall of Vicksburg to leave Arkansas vulnerable to Union attack. Prentiss reported losses of 57 dead, 146 wounded and 36 captured or missing, for a total of 239. Confederate losses were much higher, at 173 dead, 687 wounded and 776 missing or captured, for a total of 1,636, or just over 20% of Holmes's entire force. Helena remained in Union hands, and was used as the base for the expedition that captured Little Rock, only two months later.

The above article appeared in the ACWS Newsletter, Summer 2010