The Battle of Pea Ridge (AKA Battle of Elkhorn Tavern) played a pivotal role in securing Missouri for the Union and opened Arkansas to Union occupation. It played a large role in preserving Missouri's tenuous loyal-state status.

Van Dorn's plan to reinvigorate the Rebel cause west of the Mississippi River exhibited his reputation as an aggressive fighter. He planned to attack Curtis's troops in northwest Arkansas and to capture St. Louis, Missouri. The Rebel Army of the West had about 16,000 men available for the upcoming struggle, while the Federal Army of the Southwest had about 10,250. The Confederates had advantages in men and artillery relative to their opponents, greater than any other Confederate force in a single campaign during the entire Civil War.

Van Dorn ordered the Army of the West north toward Fayette (Washington County), hoping to destroy the scattered Union detachments that Curtis dispersed around his central position near Little Sugar Creek. The plan failed as Union Brigadier General Franz Sigel's forces in Bentonville escaped to Union lines around Little Sugar Creek. The Confederate men and animals were worn out from the march over the Boston Mountains, had had little sleep, and brought few supplies. Despite this, Van Dorn formed an even more ambitious plan. He decided to attack from the rear. He split the Army of the West into two forces, separated by Pea Ridge, one under McCulloch to skirt the western edge of the ridge and come in behind the Federal troops, while the other wing under Price would take the Bentonville Detour around the ridge, then take Telegraph Road south and link with McCulloch at Elkhorn Tavern to attack in the rear.

While Curtis did not anticipate such a wide-ranging envelopment, he took precautions by felling trees and making obstructions to delay any Rebel moves around Pea Ridge via the Bentonville Detour. The Confederate attack began the morning of March 7. Curtis initially believed that the Rebels were trying to slip part of their force around his right flank but that most of the force was in front of him. He dispatched troops under Colonel Peter J. Osterhaus from the Second Division to determine the strength of the Confederates to the west of his army. This sparked the first shots of the battle.

After initial success, the Rebel attack at Leetown (Benton County) met disaster as McCulloch decided to reconnoitre the Federal position and was killed by Union troops. Yankee soldiers also gunned down the second -in-command, Brigadier General James McIntosh. The Confederates had huge advantages in numbers and men, but no leaders. 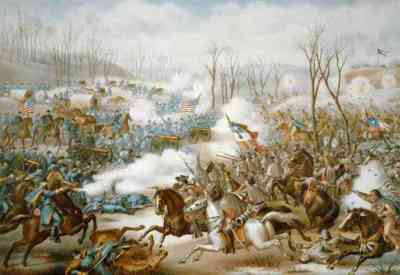 All was not lost for the Rebels. Colonel Louis Hébert led a large force east of Leetown in an attack on still outnumbered forces. Hebert did not know about McCulloch and McIntosh's deaths and that he was the highest ranking Confederate officer on this part of the field. He led his force of about 2,000 in an uncoordinated and unsupported attack. His attack ran into dense woods and seemed to make progress. Yankee reinforcements led by Colonel Jefferson Columbus Davis of the Third Division blunted the assault; Hebert got lost in the woods and was captured. Thus the Confederates were down to the fourth-ranking officer on the battlefield, Brigadier General Albert Pike. Pike did nothing to keep the Rebel effort going. Price's force was late in starting its attack, but once in action the Confederates made great progress. About 10:30 a.m., Curtis became aware of large numbers of Rebels on Telegraph Road, behind him. Colonel Eugene Carr's Fourth Division gave ground grudgingly before Price's superior numbers. In the late afternoon, the Confederates pushed Carr's battered Fourth Division back from the area around Elkhorn Tavern. Missouri rebels led by Colonel Henry Little forced the Federal troops around Elkhorn Tavern south to Ruddick's cornfield. A flank movement by Price's forces against the Fourth Iowa under Colonel Grenville Dodge failed, but Little's men moving east on Huntsville Road dislodged the Iowans as nightfall ended the fighting.

The Battle of Pea Ridge would be decided the next day. Curtis spent most of the night of March 7 preparing. He rearranged the Army of the Southwest and made sure the men were fed, rested, and supplied with ammunition. The next morning, Union troops were ready to resume combat, but the Confederates were not. Van Dorn needed to re-concentrate the army. In the process, he forgot to bring up the supply trains. Most of the Rebels did not get food or new ammunition. The mistake proved fatal.The fighting on March 8 was decisive. Federal cannoneers quickly silenced, destroyed, or forced their Rebel counterparts to retreat. As Curtis prepared to attack with the entire Army of the Southwest, Van Dorn realized his supply trains were still in Bentonville. Comprehending he had lost and was in danger of being trapped and destroyed, Van Dorn sent the exhausted army east toward Huntsville.

The Battle of Pea Ridge was over, and it was a resounding Union victory. The battle was one of the bloodiest west of the Mississippi. The Confederates suffered about 2,000 casualties. The Union had 1,384 casualties.

Pea Ridge changed the strategic outlook of the Civil War in the transMississippi west. Van Dorn was so demoralized that he took the Army of the West to the east bank of the Mississippi, leaving Arkansas defenceless. This combined with the Union victory at Pea Ridge, secured Missouri for the Union. Although Confederates made other attempts to take Missouri, the Pea Ridge Campaign proved to be the best opportunity for the Rebels. With Missouri and St. Louis secure, the Union emphasis switched to capturing the rest of the Mississippi River Valley.

The above article appeared in the ACWS Newsletter, Spring 2010