The Battle of Philippi, fought June 3, 1861, in what is now West Virginia, is known as the "first land battle of the Civil War" or the "first inland battle of the Civil War." A minor affair that lasted less than 20 minutes and resulted in no fatalities, it would barely be a footnote of the American Civil War except that it marked the first inland clash between significant numbers of troops. It also was an important step on George B. McClellan's road to becoming commander of the Army of the Potomac, the largest Union army. Philippi, a town of less than 500, held little military significance. The real prize was Grafton, some 25 miles north. There, the Parkersburg-Grafton Railroad joined the Baltimore & Ohio, the only continuous east-west connector between the East Coast and the Ohio River and the states of the Old Northwest.

General Robert E. Lee, commanding all military forces in Virginia, sent Mexican War veteran Col. George Porterfield to organize the troops mustering at Grafton and hold the rail lines. Lee underestimated the level of longstanding resentment in that part of Western Virginia toward the government in Richmond, however, and Porterfield found only a handful of troops, with whatever weapons they had brought from home and little or no military training. He eventually received a few-very few- reinforcements from Shenandoah Valley and "about 1,000 rusty muskets," along with 1,500 percussion caps meant for shotguns. Unable to hold Grafton, primarily a Union town, he withdrew to secession supporting Philippi. 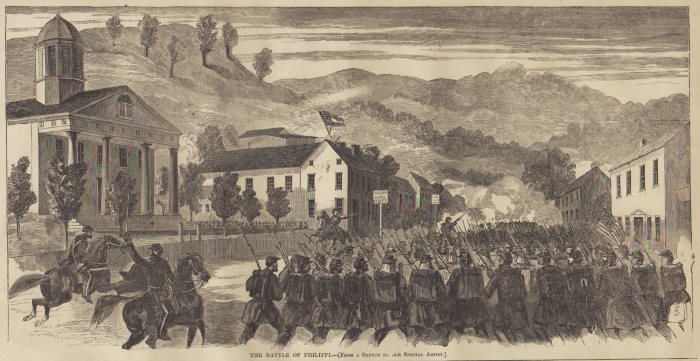 At the governor's suggestion, Porterfield burned a few bridges to slow any movements against him from Wheeling in the state's northern panhandle. That provided Major General George B. McClellan, commanding the Department of the Ohio, the opportunity he had been waiting for. Both McClellan and Porterfield had been restrained by their superior officers pending Virginia's vote on seceding. With that issue now decided in favor of secession, McClellan sent infantry and artillery across the Ohio River to protect the lives and property of Union-loyal Virginians, most of whom lived in the most northwestern counties.

One regiment of such Virginians had already formed at Wheeling, under Col. Benjamin Kelley, and another was being raised there. Using the railroads, Kelley and a portion of the troops sent by McClellan traveled to Grafton, where they were joined by Ohio and Indiana troops that arrived on trains from Parkersburg. On the storm-swept night of June 2-3, Col. Ebenezer Dumont of Indiana led 1,400 men, along with two cannon of the Cleveland Light Artillery, southeast toward Philippi. From the northeast, Kelley led another 1,600 rainsoaked men. Dumont was to hold the Rebels in place with a demonstration from the west while Kelley intersected the Beverly Road and swept in from the southeast to bag the lot. The plan went awry when Kelley took a wrong turn and entered Philippi not far from where Dumont's men were.

Porterfield was well aware of his opponents' plan and had made preparations for his little army to move to Beverly higher in the mountains the next morning. By pushing on through the stormy night, Kelley and Dumont caught the Confederates sleeping. Some of the defenders made a brief stand while others took to their heels in the direction of Beverly, giving the battle the derisive nickname "the Philippi Races."

An Indiana regiment of Dumont's command stormed across a covered bridge over the Tygart River into town about the time Kelley's men swept in from the east. Riding up the street in pursuit of the fleeing Confederates, Kelley was seriously wounded by a bullet in the chest, fired by one of Porterfield's men who had concealed himself. Kelley survived and rose to the rank of brigadier general, in command of the Department of West Virginia. Dumont would be likewise promoted but would cut his military career short after being elected to Congress the following year.

Though both sides claimed to have killed several of their opponents, there were no fatalities in the brief affair. One young Confederate, J. E. Hanger, was wounded by a cannonball and had to have his leg amputated by a Union surgeon. Returning home to the Shenandoah Valley, the former engineering student created the world's first realistic, flexible prosthesis and went on to found what is now Hanger Prosthetics and Orthothics, still the largest such company in the world.

Porterfield was largely exonerated by a court-martial inquiry but never held field command again. McClellan, who was not present at Philippi but was in charge of the department, won accolades. Another victory soon after at Rich Mountain propelled him into command of the Army of the Potomac after the Union embarrassment at the Battle of First Bull Run (Battle of First Manassas) in eastern Virginia on July 21.

The covered bridge that Dumont's troops crossed still stands, a memorial to "the first land battle of the Civil War."

The above article appeared in the ACWS Newsletter, Spring 2015