Early in the Civil War, Union General-in-Chief Winfield Scott devised the "Anaconda Plan" for defeating the Confederacy. A hero of the Mexican-American War, Scott called for the blockade of the Southern coast as well as the capture of the Mississippi River. This latter move was designed to split the Confederacy in two and prevent supplies from moving east and west.

The first step to securing the Mississippi was the capture of New Orleans. The Confederacy's largest city and busiest port, New Orleans was defended by two large forts, Jackson and St. Philip, situated on the river below the city. 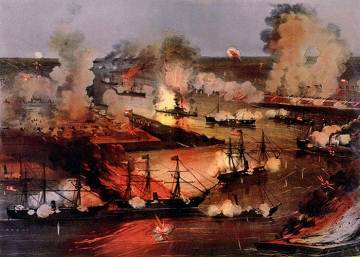 The task of taking the city fell to the US Navy and Flag Officer David G. Farragut. A long-serving officer and commander of the West Gulf Blockading Squadron, Farragut established his base of operations at Ship Island off the coast of Mississippi. Assessing the Confederate defences, Farragut initially planned to reduce the forts with mortar fire before advancing his fleet up the river. Rendezvousing at Head of Passes on April 8, 1862, Farragut's ships moved up the river towards the forts. Arriving, Farragut was confronted by Forts Jackson and St. Philip, as well as a chain barricade and four smaller batteries.

The Confederate defences were commanded by Major General Mansfield Lovell who had his headquarters in New Orleans. Immediate command of the forts fell to Brigadier General Johnson K. Duncan. Supporting the static defences were the River Defence Fleet consisting of 10 gunboats, as well as the ironclads CSS Louisiana and CSS Manassas. The former, while a powerful ship, was not complete and was used as a floating battery during the battle.

Though sceptical about the plan, Farragut advanced his mortar boats on April 18, under the command of Commander David D. Porter. Firing non-stop for five days and nights, the mortars pounded the forts, but were unable to completely disable their batteries. As the shells rained down, sailors from USS Itasca and USS Pinola rowed forward and opened a gap in the chain barricade. On April 23, Farragut, impatient with the bombardment's results, began planning to run his fleet past the forts. Ordering his captains to drape their vessels in chain, iron plate, and other protective materials, Farragut divided the fleet into three sections for the coming action.

At 2:00 AM on April 24, the Union fleet began moving upstream, with the first division coming under fire an hour and fifteen minutes later. Racing ahead, the first division was soon clear of the forts, however Farragut's second division encountered more difficulty. As his flagship, USS Hartford cleared the forts; it was forced to turn to avoid a Confederate fire raft and ran aground. Seeing the Union ship in trouble, the Confederates redirected the fire raft towards Hartford causing a fire to break out on the vessel. Moving quickly, the crew extinguished the flames and was able to back the ship out of the mud.

Above the forts, the Union ships encountered the River Defence Fleet and CSS Manassas. While the gunboats were easily dealt with, Manassas attempted to ram USS Pensacola, but missed. Moving downstream, it was accidentally fired upon by the forts before moving to strike USS Brooklyn. Ramming the Union ship, Manassas failed to strike a fatal blow as it hit Brooklyn's full coal bunkers. By the time the fighting ended, Manassas was downstream of the Union fleet and unable to make enough speed against the current to ram effectively. As a result, its captain ran it aground where it was destroyed by Union gun fire.

Having successfully cleared the forts with minimal losses, Farragut began steaming upstream to New Orleans. Arriving off the city on April 25, he immediately demanded its surrender. Sending a force ashore, Farragut was told by the mayor that only Gen. Lovell could surrender the city. This was countered when Lovell informed the mayor that he was retreating and that the city was not his to surrender. After four days of this, Farragut ordered his men to hoist the US flag over the customs house and city hall. During this time, the garrisons of the Forts Jackson and St. Philip, now cut off from the city, surrendered. On May 1, Union troops under Major General Benjamin Butler arrived to take official custody of the city.

The battle to capture New Orleans cost Farragut a mere 37 killed and 149 wounded. Though he was initially unable to get all of his fleet past the forts, he succeeded in getting 13 ships upstream which enabled him to capture the Confederacy's greatest port and centre of trade. For Lovell, the fighting along the river cost him around 782 killed and wounded, as well as approximately 6,000 captured. The loss of the city effectively ended Lovell's career. After the fall of New Orleans, Farragut was able to take control of much of the lower Mississippi and succeeded in capturing Baton Rouge and Natchez.

The above article appeared in the ACWS Newsletter, Winter 2012