THE BOY MARTYR OF THE CONFEDERACY 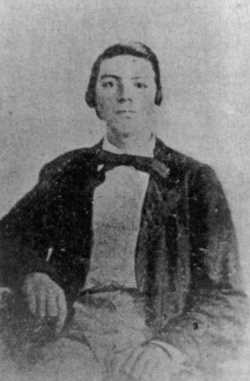 Young David O. Dodd hung on the end of a rope in the yards of his alma mater, St Johns College. His death was not a merciful one as the rope stretched and nearly 5 minutes passed before he passed away. Convicted of spying on occupying Federal forces in Little Rock, Arkansas, he had been sentenced to death by Union forces. The date was January 8th 1864. David was only 17 years old and he has forever been known as the 'Boy Martyr of the Confederacy'.

David Owen Dodd was born in Port Lavaca, Texas in November of 1846. In his youth, his parents moved to Little Rock, Arkansas. He studied at St John's Masonic College before a bout of malaria curtailed his studies. The onset of the Civil War turned many lives including the Dodd family upside down when Union forces under Union General Frederick Steele captured Little Rock, Arkansas. As a result, the family evacuated south to Confederate held Camden, Arkansas. However, they still retained connections in Little Rock.

On December 24th 1864, David Dodd, only 17 and assumed a minor, neutral and below the age of conscription, travelled to Little Rock on his mule ostensibly on behalf of his father's business and carrying letters purporting to this business. He carried a pass from Confederate General James Fagan and his birth certificate to aid in passing between the Union and Confederate lines. The truth behind David Dodd's sojourn to Little Rock remains murky but his trip highlighted some holiday soirees as he was popular with the local girls as there were very few young men in the village.

Upon his return on 29th December 1864, he handed over his pass to the Union Authorities as he crossed the Federal lines. Yet, after leaving the Union lines, he occidentally stumbled back into them. As such, he found himself without identification and in enemy hands. Attempting to provide some sort of identification, he turned over a small, leather book to the Union soldiers.

On examining the book, the Union soldiers passed the book to a Union Officer who discovered a series of dots and dashes which he quickly determined to be Morse code. The message was deciphered and pinpointed the precise strength and location of Union forces particularly the 3rd Ohio Battery and 11th Ohio Battery around Little Rock. He was subsequently imprisoned in a nearby house called 'The Ten Mile House'. This was a Union outpost on the outskirts of Little Rock. He was later transferred to the Union arsenal in down town Little Rock where he was interrogated for 2 days. He was then tried by a Military Tribunal of six Union Officers and following a verdict of four to two was convicted of spying.

The Union General Frederick Steele offered him his freedom and life if he revealed the names of those who supplied him with the dispositions of the Union forces. He replied "I can give my life for my country but I cannot betray a friend." Though he never revealed the names, he had previously met a 15 year old girl called Mary Dodge and her father whose home was used as Union Officer quarters. She was described by the Federal authorities as an 'ardent little rebel' and both her and her father were later both summarily escorted to Vermont by Union armed guards to reside there for the rest of the war. This refusal to reveal any names sealed his fate.

On January 8th 1864, a day so cold and bitter that the Arkansas river froze over, David O Dodd was hung. Five to six thousand people watched but these onlookers and Union soldiers were both ill and appalled at the macabre spectacle as the rope stretched and he took five minutes to die. The records are unclear as to his actual demise but some contend two Union soldiers grabbed his legs to hasten his death whilst others contend a Union soldier climbed up the gibbet to twist the rope and raise him off the ground. Military Doctors recorded his death as due to 'a disrupted spine'.

David O. Dodd remains a hero by many in Little Rock and is known as the 'The Boy Martyr of the Confederacy' and the 'Arkansas Boy Hero'. He rests in Mount Holly Cemetery in down town Little Rock. He is honoured every year by the Sons of Confederate Veterans and remains in local folklore. There is a scroll at the base of his grave. It reads 'Arkansas Boy Martyr of the Confederacy'.

The above article appeared in the ACWS Newsletter, Spring 2014