This is the story of an English man who took part in the war between the states. George Gibbs was born in Loughborough, Leicestershire in 1826. At the age of nine he left England with his parents and his brother John. His father was a cobbler, they opened a shoe shop in New York. George learnt his father's trade and in 1844 moved to Cincinnati.

In 1846 at the age of 20 he joined the 1st Ohio Volunteer Infantry to fight against Mexico where he saw action in the battles of Monterey, Bunea Vista and Matamoras.

America won the two-year conflict with Mexico thus taking control of the territory that would become the states of Arizona, California, Nevada, New Mexico, Texas and Utah.

George now a farmer, married with children age 35 enlisted to fight for the North with 25th Indiana Volunteer Infantry. He fought in the guerrilla type warfare in Tennessee. He was probably fighting against rebels who kitted out with shoes made by fellow workers of his father as most of the boots worn by the south were smuggled in via the Caribbean from Northampton.

George fought at the Battle of Shiloh where 23,746 men were left dead, wounded or missing. The battle was described in official dispatches to Congress as "The hardest ever fought on this continent". He came through the two days of battle unscathed. He wasn't so lucky at the Battle of Hatchie River on the 4th October where he had his foot blown off by a cannon ball. He was probably operated on in a field hospital where the conditions were poor and many people died through infection but he survived and records show he spent six months in Jackson, Tennessee recovering. For him the war was over.

George returned home to his wife Mary and their eight children. His wife Mary died in 1882 and George remarried two years later to another Mary, they moved around in his twilight years living in Seymour, Indiana and Foster, Ohio. After fight in two wars and surviving fate still had more drama in his life. In 1903 at 82 years old he died when a train at a railway crossing hit the wagon he was driving.

His death made headline news in the local paper: -

He failed to notice the approach of the express and just as his horse crossed the track the engine struck his wagon, tearing it into hundreds of pieces."

George was buried in a hillside cemetery in Southern Indiana on land that was once part of his farm. 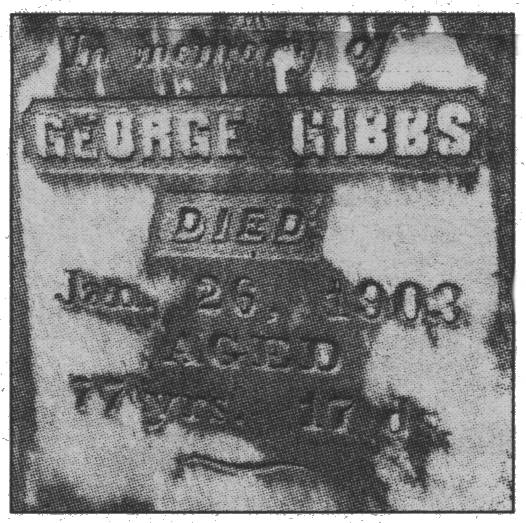 The above article appeared in the ACWS Newsletter, December 2002