Griswoldville - The Gettysburg of Georgia

Whilst marching South on his infamous "March to the Sea", General Sherman split his 60,000 strong Army into 2 Corps under General Slocum and General Oliver O. Howard. General Howard commanded the right wing of the Army known as the Army of the Tennessee. During their march South, neither Federal column had experienced any Confederate resistance with the only hindrance being General Joseph "Fighting Joe" Wheelers 3,500 rebel cavalry who were constantly harassing at their heels. All the able bodied men of conscription age from the South were already fighting with General Robert E Lee in Virginia or General John B Hood in Tennessee. As such, in an effort to try and confront this Union onslaught, the Confederate High command decided to target General Howards column as it headed via Midgeville on its long term south easterly direction towards Millen and ultimately Savannah. The Confederate High command which consisted of Generals Hardee and Taylor were summoned to Macon, Georgia by overall Confederate commander, General Beauregard with his 2 Military Advisors, Governor Howell Cobb and Major General G.W Smith to plan the response. It was only the latter that brought any troops with him to Macon namely 3,000 Georgia State Militia who had recently been summoned into military service due to the impending crisis. As a result of this meeting, the 4 hastily constructed Confederate brigades (in reality not much larger than regiments) under the command of rebel militia Brigadier General Pleasant J Philips set out at once from Macon in the direction of Augusta to confront the Federal column. Confederate Major General G W Smith stayed behind in Macon to organise supplies. On earlier passing around Macon, General Howard and his Army of the Tennessee decided to leave a rear guard beyond Griswoldville at a crossing on the Central Georgia railway where he had passed. This rear guard consisted of a single brigade namely the 2nd Brigade, 1st Division XV Corps under Brigadier General Charles. C Walcutt. The brigade consisted of 6 Infantry regiments supported by an artillery regiment (Battery B, 1st Michigan). They took strong defensive positions along a crest of the hill at the Duncan farm overlooking the crossing. 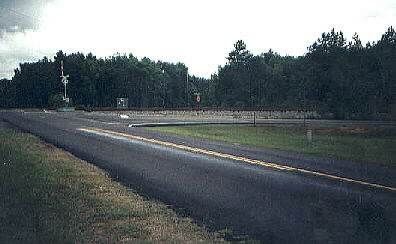 Site of Griswoldville and the battle. Nothing is left but the reason Samuel Griswold came to the area -- the railroad.

Both its flanks were protected by swampy ground and there was an open field in front of their breastworks made of rails and logs. During their drive South, the Union columns had fought no infantry engagements whatsoever so it was with total astonishment that the 1,500 Union soldiers suddenly saw a heavy rebel infantry column marching towards them through the town of Griswoldville. The town of Griswoldville had only the day before been completely torched by marauding Union General Kilpatrick`s cavalry due to its Arms (Pistol) and Munitions factories. However, the Federals became even more astonished as the rebel troops immediately formed for attack in 3 compact lines and started walking straight towards them across the stubble of the open field in front of their position. A Union Officer who saw the movement described the action as appearing to be one of "more courage than discretion". As such, with their accustomed ease and expertise, the battle hardened western XV Corps veterans slowly levelled their muskets as well as many who had newly acquired Spencer repeating rifles and fired at the approaching rebels. The devastating fire including supporting artillery canister smashed into the rebels and stopped them in their tracks about 45 yards from their positions in a ravine close to their breastworks. Major Asias Willison, commanding the 103rd Illinois Infantry Regiment at the time, later wrote "As soon as they (Georgia State Infantry) came within range of our muskets, a most terrific fire was poured into their ranks, doing fearful execution......... still they moved forward, and came within 45 yards of our works. Here they attempted to reform their line, but so destructive was the fire that they were compelled

Nevertheless, the rebels did reform again in close formation and marched towards the Union works. Once again, they were blown away by the heavy volleys and canister from behind the Federal breastworks. 7 times with repeated heavy losses this occurred before the rebels eventually withdrew in the dark and left the field strewn with their dead, dying and wounded.

Whooping with delight and the total ease of their victory, the Union troops ran out onto the field to gather their spoils and booty. Soon, however, all their cries of delight froze in their throats as they saw what lay before them. To their horror, they saw who they had been fighting. Long lines of old men and young boys were all lying in attitudes of death, dying and wounded where they had been struck. Over 600 rebels lay there with the loss of barely 60 Union soldiers. Many of the Confederate wounded had crawled back into the relative shelter and protection of the ravine where they were later found in piles with the dead after the battle. In the pile, the Federals found a 14 year old boy with a broken arm and leg. A Union soldier wrote "Next to him, cold in death, lay his father, two brothers and an Uncle. It was a harvest of death". A severely wounded Confederate told his Union captor after being asked why he was fighting replied that he was fighting next to his neighbour and they were all fighting for each other. Among the dead and wounded were several black Confederate soldiers about whom little is historically known. Eyewitnesses describe the branch of the nearby Big Sandy Creek that ran through the ravine turning red with all the blood spilt.

After the battle, Union Colonel Charles Wills recorded in a letter home: "Old gray haired men and weakly looking men and little boys, not over 15 years old, lay dead or writhing in pain. I pity those boys. I was never more affected at the sight of dead and wounded before. I hope we will never have to shoot at such men again. They knew nothing at all about fighting and I think their Officers knew as little or else certainly knew nothing of our being there".

"There is no God in war" he fumed "It is merciless, vindictive, un-Christian, savage, relentless. It is all that devils wish for".

The 3000 Georgia State Militia who fought at the battle of Griswoldville on November 22nd 1864 consisted of old men, young boys, 2 emergency battalions of factory workers from Augusta and Athens and others considered unfit for the regular Confederate Army. They were armed with squirrel rifles, shotguns and smooth bore muskets. Their commanding Officers had little experience of battle. They were known as "Joe Brown`s Pets" after Governor Brown who had formed the Georgia State Militia as a Home Guard.

History would probably have never remembered these Confederates if Union General Sherman had not put the torch to the town of Griswoldville, 10 miles east of Macon through which they had just marched and witnessed at first hand the waves and level of destruction being waged through the South. William C Scaife, the premier Civil War Historian of Georgia believes "It was never intended to be a battle". Many other Civil War Historians believe it was one of the most tragic, one sided and foolish actions of the entire American Civil War.

However, there is also another interpretation why this long forgotten battle of Griswoldville must be remembered and preserved for generations to come. It should also serve as a memorial to one of the most courageous actions of the Civil War where tales of incredible bravery and heroism took place. The Confederates who fought were not seasoned regular soldiers of conscription age but old men in their 60`s and young boys in their early teens who turned out to defend their homes and neighbours against the destruction of General Sherman`s onslaught. At Griswoldville, they were all Confederate heroes at this Gettysburg of Georgia. Fortunately, the state of Georgia through its Civil War Commission has now dedicated 17 acres of the original battlefield to be maintained as a state historic site before another onslaught involving building, development and commercialism encroaches on this hallowed ground. This is particularly important as many Civil War sites become more vulnerable in times of economic recession.

Following the battle of Griswoldville, General Shermans "March to the Sea" continued unabated and some five weeks later, on December 22nd 1864, he presented the city of Savannah to President Lincoln as a birthday present.

The above article appeared in the ACWS Newsletter, Spring 2012