History is full of heroes and villains, the freedom fighter seen by one side, is the terrorist of the other.

Here is the story of two such men from very different ends of the scales, who took the war to the Union army in similar ways.

It has been claimed by some that the activities of partisan ranger bands in northern Virginia especially those of J S Mosby may have prevented a Union victory in the summer or fall of 1864. 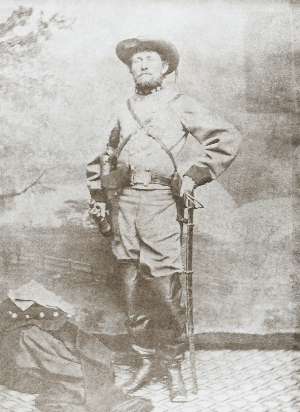 A Virginian with a taste for violence, Mosby had been practicing law at the outbreak of the war. He was assigned as a private and then lieutenant between 1861 - 62 with the 1st Virginia cavalry, and with the 43rd Virginia cavalry as Captain Major, Lieutenant-Colonel between 1863 - 64, before becoming a full Colonel of Mosby's cavalry regiment on the 7th December 1864.

Originally an enlisted man and officer with the 1st Virginia Cavalry, he came into conflict with the unit's Colonel, "Grumble Jones", and joined JEB Stuart's staff as a scout, during which time he paved the way for Stuart's famous ride around McClelland. After a brief time of captivity in July 1862 he rejoined Stuart's staff and was rewarded with the authority to raise a band of partisans for service in Loudon Valley in North Virginia. Originally a battalion, his command was raised to regimental strength in the last months of the war.

He managed to wreak havoc among Union supply lines, forcing field commanders to detach large numbers of men to guard their communications. His forays took him within the lines guarding Washington, with Mosby often doing the advance scouting himself in disguise.

Early in 1863, with 29 men, he rode into Fairfax Court House and roused Union General Edwin H Stoughton from bed with a slap on the rear end. Following the capture of Generals Crook and Kelley by McNeil's partisans, Mosby complimented them, stating that he would have to ride into Washington and bring out Abraham Lincoln to top their success, and nearly did top it by nearly capturing a train on which the celebrated U.S. Grant was a passenger!

The disruption of supply lines and constant disappearance of couriers frustrated army and lesser group commanders to such a degree that some took it upon themselves to execute any guerrilla taken prisoner.

George Custer once executed six of Mosby's men in 1864, an action which was immediately responded to by the execution of seven of Custer's, a note attached to one of the bodies stated that Mosby would carry out similar reprisals if the action was repeated - the killing stopped.

Mosby insisted that his men wear Confederate uniform so they could expect treatment becoming prisoners of war should they be taken.

With the surrender of Lee, Mosby simply disbanded his partisans on the 20th April, 1865, rather than formally surrender.

While partisans were certainly a nuisance to the Federal commanders, it is an open question as to how effective they were in prolonging the conflict in fact, many southerners were very critical of partisans in general, only some southerners accepting Mosby's command.

Not pardoned until 1866, Mosby practiced law again, and befriended Grant.

For supporting Grant's election campaign in 1868 and 1872, he earned the enmity of many southerners. He received an appointment as U.S. Consul in Hong Kong and other government posts. 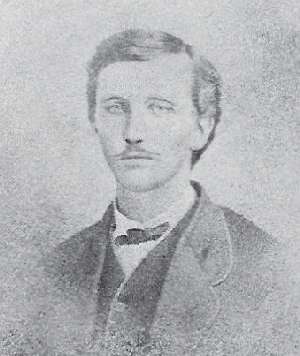 Born in 1837 in Canal Dover, Ohio where he was a school teacher, He went to Utah in 1858 and tried his luck as a gambler. He lived in Lawrence, Kansas as a school teacher in 1859 and 1860. Warrants for his arrest on charges of murder, theft and horse stealing by the time he left for Missouri in 1860.

When civil war broke out in 1861 he was leading a band of guerillas around Kansas and Missouri. Quantrill developed a style of guerilla warfare raiding farms and communities sympathetic to the Union.

In 1862 he was commissioned a captain in the Confederate army and declared an outlaw by the Union army.

The most famous raid carried out by Quantrill's raiders was on 21st August 1863, when they pillaged and burned Lawrence, Kansas, drinking every drop of whiskey, and robbing everything and everybody, and shooting every male they came across. When they left, over 150 lay dead. An act of war, or just revenge?

Some witness accounts were written in letters and reminiscences, here are a few:-

O W McAlaster; "It being very warm, I was up about 5 o'clock on the morning of the 21st August 1863. A noise attracted my attention, and I looked south and saw between 300 and 400 horsemen...In an instant they spread out...shooting every person they saw...They had reached a camp of thirty two unarmed recruits...I saw them shooting down these men, who ran in every direction, some crawling under sidewalks and into bushes, only about five escaping with their lives. Then I realised that Quantrill and his guerillas were upon us."

Sophia L Bissell;..."about ½ mile away were ever so many men on horseback, coming along very quickly, strung out, oh I should think there must have been three or four hundred of them. In a few minutes...we heard them say "Halt!" and then...they all separated into bands and went yelling and shooting as fast as they could ride, a band to each street".

Brigetta Dix Flintom; "I saw men jumping from windows and fleeing for their lives. Several were killed as they ran".

Hiram Towne; "Almost everyone was abed and they were all over the city in ten minutes and shot down every one that showed his head, so that they had no chance to get together to defend the town".

Quantrill's raiders included such famous people as Jesse and Frank James and Jim and Cole Younger who later used the same tactics to rob trains.

It is obvious that Quantrill was very much a loose cannon who only looked after his own interests, in fact he was refused a Majority by the Confederate army who were appalled by his lack of control and aggressive behaviour.

Quantrill was fatally wounded in 1865 when his band were surprised by Union soldiers.

The above article appeared in the ACWS Newsletter, February 2001