HIRAM BERDAN AND THE US SHARPSHOOTERS 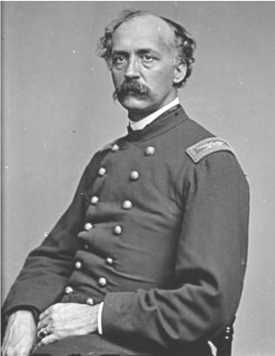 Hiram Berdan was a talented inventor with over 30 patents to his name. These range from a collapsible life boat (a patent that was donated to a charity, and never built) to machines to automate the production of bread (these machines were used by some companies at the time of the Civil War to make Army Bread, or Hardtack) to post-war weapons modifications sold to the Russian military. Through these patents, Berdan became a very wealthy man with contacts in important governmental and business positions.

He was a likely choice to form a regiment of expert marksmen because of his influence, and because he was known to be the best rifle shot in the United States at the time, in formal competition. Target shooting was a popular sport in the northern United States for affluent and common men alike.. Most of the men who formed the Sharpshooters were not wealthy business men, like Berdan, but rather men who had learned to shoot through hunting, competition shooting, or previous war experience. The call to a Sharpshooter regiments was well received, so well in fact, that the states began keeping their marksmen for volunteer sharpshooting regiments, to the dissatisfaction of Berdan.

At the beginning of the war Hiram Berdan used his recognition to persuade the Federal government to allow him to establish a regiment of Sharpshooters recruited from each of the loyal states and meeting specific marksmen restrictions. It is currently debated by historians and scholars whether this idea actually belonged to Hiram Berdan. It is possible that Casper Trepp, who served as Captain of Company A, 1st U.S. Sharpshooters and later Major to Hiram Berdan, brought the idea of a rifle regiment from Europe. Trepp came from Switzerland after serving in the Crimean war. He was an experienced infantryman and had witnessed both Napoleonic tactics and the rifle regiments of the European armies. The tactics used by the Sharpshooters (operating in small teams, using stealth and cover, trying to maintain distance to the enemy) are believe to be the direct parent of later American fighting tactics. Other aspects of the Sharpshooters with European flavour are the green uniforms (tradition European uniform colour for riflemen - possible the origin of the Green Berets as a symbol of an elite fighting force), the leather leggings and the hairy calf-skin knapsack that the Sharpshooters carried. It is likely that Trepp knew he did not have the clout needed to persuade the Union to form these rifle regiments, and so gave Berdan the push needed to campaign for the regiments. There is some evidence of this in the writings of other Swiss Sharpshooters. Regardless of this, there grew a significant level of animosity between the two men, leading Trepp to attempted resignation (Berdan refused to accept Trepp's resignation, several times) and both men to file legal claims against each other.

The claims against Hiram Berdan were largely centred around the fact that he was seldom, if ever, seen on the field of battle. Though Berdan spent a great amount of time and effort to gain the ranks of Brigadier-General and Major- General, these were fought largely on the grounds that Berdan had not actually aided the battles. Berdan was not a military man by nature, and was possibly the most difficult Sharpshooter to be taught drill. It was Lieutenant Colonel Frederick Mears who taught the Sharpshooters how to drill and to fight, largely against his will. Mears left the Sharpshooters to command the 4th U.S. Regulars.

Hiram Berdan stayed in Washington D.C. for several months of the war, recovering from a wound (that the military records do not mention) and attempting to draw more recruits to fill the ranks of the two Regiments, now depleted by war-time losses. After Casper Trepp was officially given command the 1st U.S. Sharpshooters after Hiram Berdan officially became the Chief of Sharpshooters. He was killed at the Battle of Mine Run, November 30, 1863.

After Gettysburg, Berdan petitioned for discharge and left the army January 2nd, 1864. After the war, Berdan took his family to Europe, where he was successful with several weapons patents. Berdan died on March 31, 1893, and was buried in the Arlington National Cemetery.

The above article appeared in the ACWS Newsletter, Spring 2014