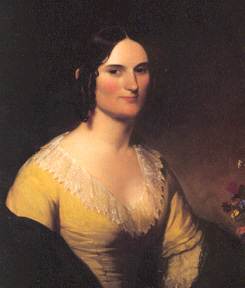 Mary Custis, was the great granddaughter of Martha Washington and daughter of George Washington Parke Custis. She must have had a happy childhood at the beautiful home she grew up in, Arlington, it was where a young West Pointer, Robert E Lee, whom she had known since childhood, came to visit in 1827. Mary returned his affections and he offered marriage, which proved to be a very happy one, They married four years later on 20th June 1831.

When war came, her beautiful home, Arlington, was confiscated, her belongings were swept away. She knew the anxiety that must be endured whose husbands and sons are in frequent combat and against heavy odds. She watched as Virginia was drained of men, money and resources, we can have some idea of the privations of the time when we read in one of his letter that General Lee sent her two peaches.

After the surrender of the South in April 1865, she wrote the following letter to her cousin, Mrs Edgar Snowden, wife of the editor-owner of the Alexandria Gazette.

I cannot tell you how much I was affected by your kind letter the first I have received from any friend since our terrible calamity and your offering us asylum in you hospitable home when I know with your large family you must find it very difficult to maintain them - Should we never be in a situation to reward your kindness, God will not forget you and your store like the widows curse never fail. We have passed through a terrible ordeal the last 10 days. Our gallant army greatly reduced by starvation and constant exposure during the whole winter to a foe which outnumbered them so greatly, discouraged by the knowledge that their homes were desiccated their families suffering became demoralised - 25 thousand threw down their arms and the 8 thousand 5 hundred who alone retained them, after several days of hard fighting without any food save a few ears of corn nor rest day or night cut off from all their provisions although they told Gen Lee they would follow him anywhere and they decided if Grant had required an unconditional surrender to sacrifice their lives and cut their way through the enemy, yet when the terms he offered were so honourable Gen Lee told them he did not think it right to sacrifice the lives of so many brave men when nothing could be gained by it. 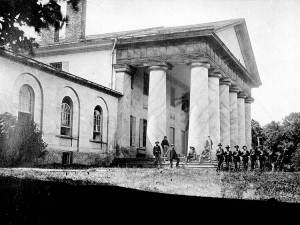 My husband and two sons got here yesterday & Rob I believe is safe tho he has not appeared yet - There are accounts of all this in the Herald so falsified that you would have a very incorrect idea of the whole affair, one thing is certain that the enemy have succeeded in their cruel and cowardly design avowed more than a year past of starving out those whom they could not subdue in any honourable way - It would take volumes to record the savage cruelty which has produced this state of things, of the houses burned over the heads of the inhabitants even in the depth of winter, the last morsels taken from helpless women and children even the bedclothes that covered them, the mills and all implements of agriculture destroyed, the watches torn from the bosoms of our refined and gentle ladies the rings from their fingered and ears, & insulted and even knocked down by these wretches & often by negro soldiers & yet we are expected to return with joy into the union with such people & to forget the desiccation they have wrought upon our fair land and our people. Future generations may forget but we never can & there is many a foul deed committed upon isolated and unprotected dwellings that can never be recorded - I wish you could have witnessed Lincoln's triumphal entry into Richmond. He was surrounded by a crowd of blacks whooping and cheering like so many demons, there was not a single respectable person to be seen & one kerchief was waved from the Spotswood Hotel by a Yankee woman - we must submit to the will of Heaven but this is bitter pill for the South to swallow May God overrule it all for their eternal good & let us all see that in mercy we have been so afflicted & humiliated.

The girls and Nannie Lee who is staying with me unite in so much love to you and yours and all our old friends in Alexandria.

Gen Lee begs his special regards to you and yours & tells you much he appreciates your kindness. We are all unsettled now and know not what our future may be. I will write again when our plans are arranged - There is a report here today that Lincoln & Seward are assassinated but I cannot believe there is any truth in it. I should be glad to hear from you, can you tell me anything about Arlington.

The above article appeared in the ACWS Newsletter, Summer 2012