The scale of the conflict at Gettysburg on the three July days in 1863 was huge; the day after Pickett's final onslaught upon the Federal centre, an area over two square miles was littered with dead and wounded soldiers of both sides. Both the armies were tired and somewhat shocked at the magnitude of the fight and all of the medical facilities were already overstretched with work.

As word spread of the battle, the need for extra help in caring for the wounded found its way into the Northern Press. Lee had left the area and had had to leave 5,500 wounded behind with surgeons who had very few supplies. The Federal forces had nearly 15,000 wounded of its own to care for and almost 2,000 wounded prisoners. At the start there was almost an adequate number of doctors and ambulances to deal with the situation, but when Gen. Meade, pressed by Washington, left the area to pursue the Rebels, he took all but 106 surgeons and left them only 30 ambulances.

Below: Nurse at work in a Field Hospital 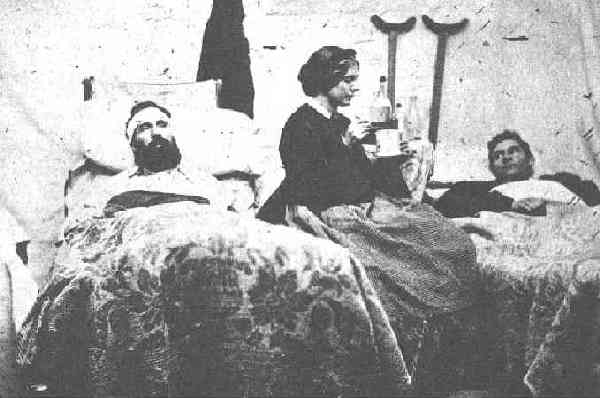 Cornelia Hancock, a daughter in a well established New Jersey Quaker family, and Euphemia Goldborough, a Baltimore belle whose family's politic leanings were in sympathy with the Southern cause heard of the situation and made their way to Gettysburg.

Euphemia, a small 27 year old, had experience. She had travelled to Frederick after the battle at Antietam and helped in the hospital treating the Confederate wounded. Since then she had been helping prisoners kept at Point Lookout.

Cornelia journeyed to Baltimore and there was interviewed by the redoubtable Dorothea Dix, the Superintendent of women nurses. "She looked us all over and pronounced all suitable save me," she recalled. "I was then 23 and she objected to my youth and rosy cheeks." However, Cornelia travelled on to Gettysburg where she found that, "the need was so great that there was no further cavil over my age".

Cornelia was not alone in not passing Miss Dix's inspection. Every type of woman was to be found working in the hospitals and in the administration of supply; one, Helen Gilson from Massachusetts, was an attractive girl who wore a short-skirted costume and charmed her patients with her singing, another, Katherine Woolsey was the daughter of a British Admiral. The Army surgeons soon realised that any help was beneficial and gradually accepted that the work they were doing was admirable.

On arrival in the town, Euphemia went to the Pennsylvania College which was full of the Confederate wounded. As the supply of food, blankets and medical supplies improved, mainly due to the work of the Sanitary Commission rather than the Army, she found that the treatment of the Southern soldiers was on equal footing to that of the Union wounded. In fact as soldiers there became able to work they were given positions in trust much to the disapproval of the Provost Marshall who pestered the Medical Director to remove them to prison camps.

Cornelia went to work in the Union second corps field hospital where very soon she became a favourite with the soldiers as she wrote home to her influential parents of the plight. She had no overall picture of the medical problems at Gettysburg but told of what she saw. "There was a long table in the woods that was the operating table, and for seven days it literally ran blood. A wagon stood nearby rapidly filling with amputated arms and legs. So appalling was the number of the wounded as yet unsuccoured, so helpless seemed the few who were battling against tremendous odds to save life, and so overwhelming was the demand for any kind of aid that could be given quickly that one's senses were benumbed by the awful responsibility that fell to the living".

As the situation in the town and on the battlefield became more organised both of the ladies found themselves working in the huge Camp Letterman, a hospital of 12 man tents, six rows made up of some 400 tents in all. Conditions here were very much better, the camp resembled a small city with laundries, kitchens and wells of fresh water. Each tent had a stove and the patients were on beds with mattresses. There was no difference between the facilities given to either Union or Confederate soldiers, many tents contained both.

However, many of the Southern men needed new clothing; Federal Provost Marshals were concerned about the Rebels getting clothing that might have aided an escape but had to allow the tattered uniforms to be replaced with whatever the Sanitary Commission sent, they did however ban them from having shoes or boots. That fact did not deter Euphemia. She would smuggle them in under the hoops of her skirt and also take letters to be sent via friends in Baltimore to families and friends.

Cornelia felt sad when her second corps hospital was closed and the wounded taken to Camp Letterman, she wrote home saying, "It is like parting with one's own family, I go to see the boys and some cry that I cannot stay with them". However, she was presented with silver medallion that they had made and inscribed "Testimonial of regard for ministrations of mercy to the wounded soldiers at Gettysburg, Pa - July 1863". It had cost the men $20 but to Cornelia it must have been priceless.

With the opening of the Camp Letterman Hospital the need for help subsided and many of the ladies who had worked non-stop to help the patients returned home. Both Cornelia and Euphemia stayed on though and it is quite likely that they knew each other although neither mentioned the other in her diary entries. As the wounded were now being moved away by railroad in ever increasing numbers, pressure was put on the medical staff to get the Confederates into prison camps, Euphemia decided that she could do more good in helping at Point Lookout. She left Gettysburg after the death of one of her favourite patients; Sam Watson of the 5th Texas had been nursed by her from the start and his passing particularly affected her. Euphemia's sister was to remark that "She was never the same joyous girl again". She took home many letters of appreciation from soldiers and a wooden ring delicately carved by a soldier with the name "Effie" on its face.

Cornelia departed soon after, she felt that she was no longer required, warning her parents that although she was heading home she would not hesitate to go wherever she felt that she was needed. She was with the Army at the Wilderness all the way to the siege of Petersburg. After the surrender of Lee's forces at Appomattox she finally went home to settle in New Jersey.

Euphemia's southern sympathies were to get her into trouble with the Federal authorities, she was under investigation for aiding patients to escape. A letter from her to a Confederate was intercepted and on November 23 a Provost Marshall's detail arrived and searched her house. She was arrested and charged with treason. Found guilty she was sent by truce steamer to Virginia for the duration of the war. In Richmond where she had by then become quite a celebrity, she lived with the family of Col. W T Patton, an officer of the 7th Virginia whom she had nursed at Gettysburg. President Jefferson gave her a post at the Treasury Dept. in which she served in addition to carrying on her work in the area's many hospitals. At the end of the war she returned to Baltimore.

The two women were by no means unique in their service, many others gave up the comforts of home to serve the wounded. Their stories show that although they had no particular skills to offer, they were both so very compassionate that they gave their all to relieve some of the suffering faced by the men who fought.