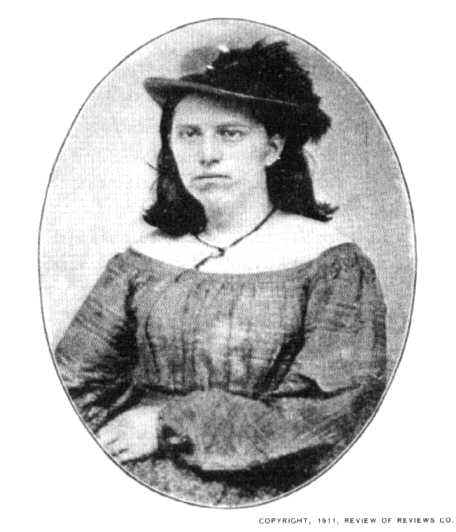 The women of the mountain districts of Virginia were as ready to do scout and spy work for the Confederate leaders as were their men-folk. Famous among these fearless girls who knew every inch of the regions in which they lived was Nancy Hart. So valuable was her work as a guide, so cleverly and often had she led Jackson's cavalry upon the Federal outposts in West Virginia, that the Northern Government offered a large reward for her capture. Lieutenant-Colonel Starr of the Ninth West Virginia finally caught her at Summerville in July, 1862. While in a temporary prison, she faced the camera for the first time in her life, displaying more alarm in front of the innocent contrivance than if it had been a body of Federal soldiery.

She posed for an itinerant photographer, and her captors placed the hat decorated with a military feather upon her head. Nancy managed to get hold of her guard's musket, shot him dead, and escaped on Colonel Starr's horse to the nearest Confederate detachment. A few days later, July 25th, she led two hundred troopers under Major Bailey to Summerville. They reached the town at four in the morning, completely surprising two companies of the Ninth West Virginia. They fired three houses, captured Colonel Starr, Lieutenant Stivers and other officers, and a large number of the men, and disappeared immediately over the Sutton road.

The Federals made no resistance.

The above article first appeared in the ACWS Newsletter, December 1998