Prior to the American Civil War, Palmyra was a small, quiet and sleepy town in a remote rural backwater of northeast Missouri. After 18 October 1862, it was to become forever remembered for one of the most infamous atrocities of the entire American Civil War which resonated throughout America and Europe long afterwards. It was on the 18 October 1862, that 10 Confederate Prisoners of War were executed in Palmyra, Missouri in reprisal for the abduction and disappearance of a pro Union symphathiser, Andrew Allsman. The Federal Officer who ordered the execution was Colonel John McNeil. He is still known today as "The Butcher of Palmyra".

Andrew Allsman was a 60 year old carpenter by trade who was a Union supporter when the Civil Was broke out. Palmyra, Missouri was a largely pro Confederate area at the time and Andrew Allsman was active in leading and informing Union forces of local Confederate sympathizers in the area which led to their subsequent arrest. He was previously a cavalryman in the 3rd Missouri Cavalry but due to his age was deemed too old for the hardships of active service. However, his detailed and extensive knowledge of both the area and its inhabitants allowed him to become the perfect guide for Union scouting parties sent out to identify and arrest rebels, secessionists and other pro southern sympathisers. As Palmyra was strongly for the South, it was no surprise that Andrew Allsman became exceedingly unpopular and was regarded as tantamount to a Union spy. In September 1862, Andrew Allsman was taken prisoner following a raid of Palmyra by Confederate forces under Colonel Joseph.C Porter who was fully aware of his captive`s pro Union actions and loyalty. However, after several skirmishes, Confederate Colonel Porter felt Andrew Allsman was a liability and decided to set him free. Andrew Allsman was very reluctant to leave as there were several men under Colonel Porter`s command who had had family members that had been informed on by him. As such, he was allowed to select a detail that would safely escort him to the city limits of Palmyra or the safety of Union lines. Andrew Allsman never made it and was never seen or heard of again. It is presumed he was taken into woods and shot in either Marion County or Lewis County.

On October 8 1862, Union Provost Marshal William R. Strachan, acting for Union Colonel O`Neil, published a notice in a local Union Newspaper that unless Andrew Allsman was returned within 10 days, 10 Confederates under Colonel Porter`s command held as prisoners in Palmyra and nearby Hannibal jails would be summarily executed. Colonel Porter was powerless to intervene as most commentators agree that Andrew Allsman had already been killed by aggrieved family members. In addition, many Confederates believed that it was merely a scare and threat that would never be carried out. Nevertheless, on October 17 1862, 10 Confederate Prisoners were selected (5 from Palmyra and 5 from Hannibal) and on 18 October 1862, all 10 were executed by a firing squad of 30 Union soldiers from the 2nd Missouri State Militia.

The execution took place after the 10 condemned Confederates had been informed the day before that unless Andrew Allsman was returned by 1.00 o`clock the next day, they would be shot at that hour. The Reverend James S. Green, of Palmyra, remained with them throughout the night of the 17 October trying to help them prepare to meet their Maker. A little after 11.00 am, 3 Union wagons drove to the jail. One wagon contained 4, and each of the others, 3 rough board wooden coffins. The condemned men were escorted from the prison and seated in the wagons, one each upon each coffin. A guard of 75 Union soldiers accompanied them to the fair grounds in the east of Palmyra and drove onto the circular amphitheatre within the grounds. The 10 coffins were then removed and placed in a row approximately 7 feet apart forming a line north to south. Following a prayer by the Reverend R.M Rhoades, during which they knelt upon the ground between the coffins, the 10 prisoners then took their seats upon the foot of each coffin. 30 soldiers of the 2nd Missouri State Militia were drawn up in a single line facing the row of coffins about 12 to 13 paces away with reserves also being drawn up in a line upon either flank of the Militia. Following handshakes by the Reverend R.M Rhoades and Colonel Strachan, the Union Post Marshal General with the prisoners, 2 of the prisoners accepted bandages for their eyes with the other 8 refusing. Approximately, 100 spectators gathered around the circular amphitheatre to witness the execution. The Officer in command then gave the order "Ready! Aim! Fire!" . The discharges were not made simultaneously, most probably due to the Union soldiers not being aware of the understanding of the Orders, and only 3 Confederates died instantaneously. The other 7 were not killed outright so the Reserves were called in who completed the task with revolvers. The deceased were then placed in their coffins and 7 were claimed by family members. The other 3 were buried in the public cemetery. 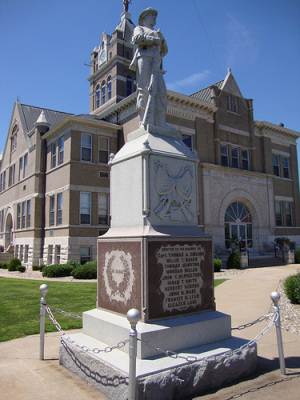 There is an excellent and imposing monument made of granite erected by the Palmyra Confederate Monument Association on 25 Feb 1907 on the Southwest corner of the Marion County Court House Square, Palmyra with the names of the 10 Confederates executed:

Following the massacre, it was claimed that Union Colonel Strachan had spared the life of one of the intended victims ( Tom Humphrey) in exchange for $500 paid by Tom Humphrey`s wife. He is also said to have violated the chastity of Mrs Humphrey as part of the bargain. He was later acquitted of rape but found guilty of embezzlement and sentenced to 1 years imprisonment and ordered to pay back $680 of state funds following a trial in 1864. He was later released early by Union General Rosecrans as he personally disapproved of the Courts findings.

In addition, reports surfaced that Andrew Allsman had been seen alive in September 1862 in the company of 2 Confederate guerillas, near Troublesome Creek in Missouri. In 1877, a farmer walking along Troublesome Creek found a skull thought to be Andrew Allsman`s. It was subsequently put on display by a Pharmacist and then others before being returned to his family for burial. However, rumours prevail to this day that it still exists unburied. Andrew Allsman is thought to have been killed by some of his enemies rather than men of Colonel Porters command and certainly nothing to do with the 10 innocent Confederates who were executed.

Sadly, the actual site of this infamous massacre and burial place of the victims at the old fairgrounds and amphitheatre in Palmyra is now under development for residential housing.

The above article appeared in the ACWS Newsletter, Autumn 2012