THE SIEGE OF PETERSBURG 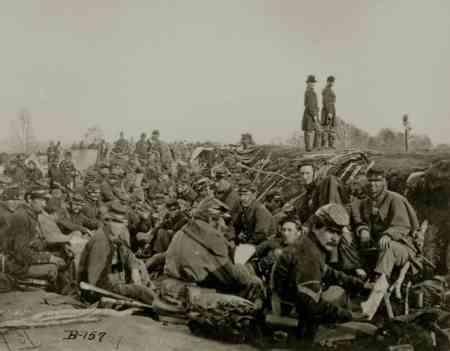 Soldiers in the trenches at Petersburg, 1865

On June 9, Maj. Gen. Benjamin Butler dispatched about 4,500 cavalry and infantry against the 2,500 Confederate defenders of Petersburg. While Butler's infantry demonstrated against the outer line of entrenchments east of Peter sburg, Kautz's cavalry division attempted to enter the city from the south via the Jerusalem Plank Road but was repulsed by Home Guards. Afterwards, Butler withdrew. This was called the "battle of old men and young boys" by local residents. On June 14-17, the Army of the Potomac crossed the James River and began moving towards Petersburg to support and renew Butler's assaults

Marching from Cold Harbour, Meade's Army of the Potomac The Siege Of Petersburg crossed the James River on transports On June 15th 1864 and a 2,200-foot long pontoon bridge at Windmill Point. Butler's leading elements (XVIII Corps and Kautz's cavalry) crossed the Appomattox River at Windmill Point and attacked the Petersburg defences on June 15. The 5,400 defenders of Petersburg under command of Gen. P.G.T. Beauregard were driven from their first line of entrenchments back to Harrison Creek. After dark the XVIII Corps was relieved by the II Corps. On June 16, the II Corps captured another section of the Confederate line; on the 17th, the IX Corps gained more ground. Beauregard stripped the Howlett Line (Bermuda Hundred) to defend the city, and Lee rushed reinforcements to Petersburg from the Army of Northern Virginia. The II, XI, and V Corps from right to left attacked on June 18 but was repulsed with heavy casualties. By now the Confederate works were heavily manned and the greatest opportunity to capture Petersburg without a siege was lost. The siege of Petersburg began. Union Gen. James St. Clair Morton, chief engineer of the IX Corps, was killed on June 17.

With Confederate defeat at Five Forks on April 1, Grant and Meade ordered a general assault against the Petersburg lines by II, IX, VI and XXIV Corps on April 2. A heroic defence of Fort Gregg by a handful of Confederates prevented the Federals from entering the city that night. Lt. Gen. A.P. Hill was killed trying to reach his troops in the confusion. After dark, Lee ordered the evacuation of Petersburg and Richmond. Grant had achieved one of the major military objectives of the war: the capture of Petersburg, which led to the fall of Richmond, the Capitol of the Confederacy.

The above article appeared in the ACWS Newsletter, Winter 2011