Forty Days and Nights
in the Wilderness of Death

The Siege of Port Hudson occurred from May 22 to July 9 1863 when Federal Troops assaulted and then surrounded the Mississippi River town of Port Hudson, Louisiana, during the Civil War. The siege lasted for 48 days with continuous fighting and involved Union General Nathaniel P Banks making two determined frontal assaults on May 27 and June 14 but being repulsed on both occasions. It is regarded as the longest siege in American history. Afterwards, the siege of Port Hudson became known as " Forty Days and Nights in the Wilderness of Death".

Port Hudson was located on a sharp bend on the Mississippi River 20 miles north of Baton Rouge, Louisiana. The Confederate stronghold, with its defensive fortifications and heavy cannon situated on 80ft high bluffs overlooking the river, protected the vital supply lines flowing north to Vicksburg. The hills and ridges of the town represented extremely tough and rough terrain, deep ravines, thick forests, swamps and cane breaks. It presented as a natural fortress. However, its transport infrastructure was poor by the beginning of the Civil War. Although a single railroad did exist, it consisted of strips of iron nailed flat to rotten ties. The whole rolling stock consisted of only 1 locomotive, 1 passenger car and 6 flat cars. This lack of transport, apart from the river, would make Port Hudson defensively vulnerable. In addition, the commanding Confederate Officer, Major General Franklin Gardner, had demanded the construction of large earthworks for fortification which necessitated continuous hard labour thereby having a severe detrimental impact on the health on the troops. They were also far too expansive to man for the garrison available. Within the fortifications, there was no logistical systems of warehouses to store food, grain, medicines and other necessary military needs. 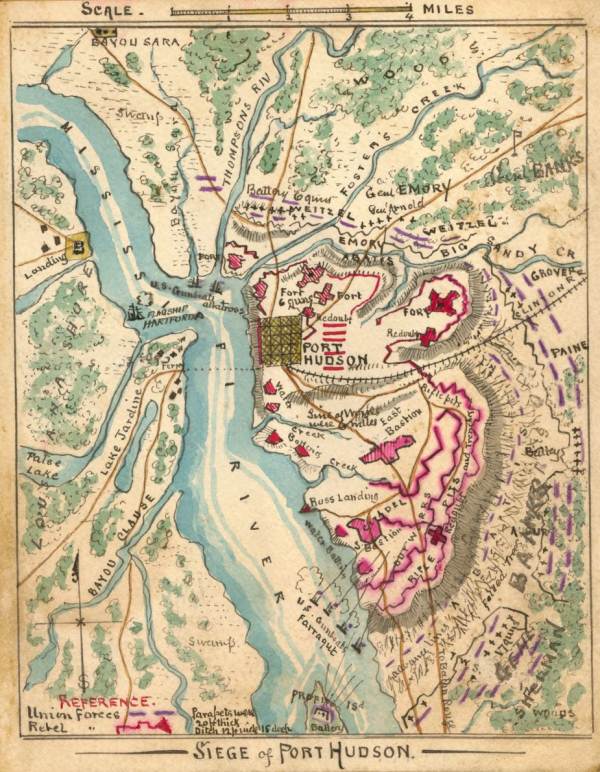 Port Hudson contained 6,800 Confederate soldiers during the long siege. Throughout this period, supplies rapidly dwindled and became extremely scarce forcing the troops to resorting to eating dogs, horses, mules and rats. Indeed Lieutenant Howard C. Wright of the 30th Louisiana Infantry stated "The last quarter of beef had been given out to the troops on the 29th June. On the 1 st July, at the request of my officers, a wounded mule was killed and cut up for experimental eating. All those who partook of it spoke highly of the dish....... some horses were also slaughtered, and their flesh was found to be very good eating, but not equal to mule. Rats of which there were plenty about the deserted camps, were also caught by many officers and men, and were found to be quite a luxury - superior, in the opinion of those who eat them, to spring chicken". Many Confederate privates also recorded the harsh conditions of the siege.

Louisiana Private Robert D. Patrick wrote "never since I have been in the army have I fared so badly and in truth I have been almost starved." Another Confederate soldier wrote " We eat all the meat and bread in the fort......eat all the beef......all the mules........all the dogs........and all the rats around us". This constant long term consumption of rats with their numerous diseases and mule which was described as a darker colour than beef with flavouring between that of beef and venison could not maintain the physical health or morale of the troops.

With regards tobacco, as it ran out, the rebel troops started smoking sumac leaves that grew wild in the woods. It was smoked by the Indians under the name of "Killickenick" and was reported to be a moderately tolerable substitute. With regards preserving grain, the remaining peas for the troops were so indegistable and unwholesome that they were fed to the horses and mules in an effort to preserve their meagre corn supplies. As a direct result, many were immediately killed.

With regards drink, there was a chronic shortage of drinking water during these hot summer Louisiana months that was exacerbated by a severe drought at the time. As a result, Lieutenant Wright continued "sugar and molasses was put to good use by the troops in making a weak description of beer which was constantly kept at the lines by the barrel-full, and drank by the soldiers in preference to the miserable water with which they were generally supplied".

However, recent discoveries have now revealed that some individual Confederates might have had some different liquid refreshment to accompany their scant and meagre rations. As, during a recent excavation of a civil war rubbish site within the Confederate fortifications, a cache of empty bottles has been found. But these are no ordinary bottles. These are some of the most expensive wine bottles of the era. These include prestigious wines such as Chateau St Julien (a full bodied dry red wine), Chateau Laroze (a dark plum coloured fruity wine) Haut Sauterne (a semi sweet dry white wine) and Chateau Lafite (aka "The Kings Wine"; a very exclusive and rare red wine that currently costs £10,000 per case for a 2005 vintage). The latter has always been and remains one of the worlds most exclusive and expensive wines. So who could have been able to enjoy such fine and rare vintage wines during one of the most gruelling sieges in American history? Who consumed the best of wines in the worst of times? Well, we`ll probably never find out but I do hope that some Confederate officer or soldier may have been able to find an ironic smile for just a brief moment whilst suffering such harsh deprivations as he savoured perhaps the dry white wine of Haut Sauterne with his semi cooked rat or toasted the deep red plum Chateau Laroze with his slice of mule. After 48 days of extreme hardship, the Confederate garrison surrendered on July 9 1963 after hearing of the nearby collapse of Vicksburg on 4 July 1863. 6,500 Confederates surrendered, 750 were killed or wounded and 250 died of disease. The Confederates could not cope with constant losses through starvation, scurvy, disease, dysentery, malaria, sniping, shell fragments, desertions and sunstroke but had valiantly held on in the most of extreme of circumstances. By early July, the chronic lack of food, ammunition and supplies had greatly reduced the men available to fight and man the trenches. 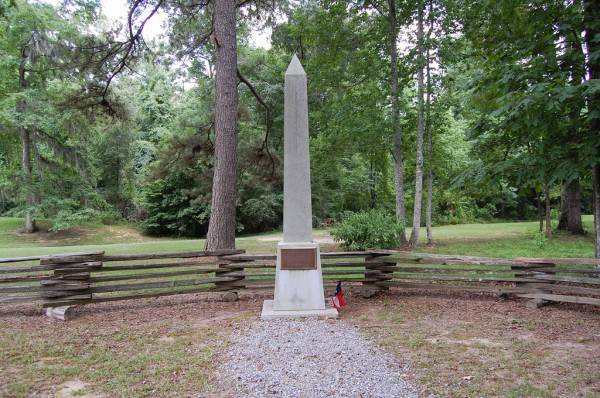 However, it is important to recognise that severe hardships were suffered and experienced by both sides in the siege of Port Hudson. The Federal Army had 5,000 killed or wounded and another 5,000 died of disease. Indeed, in recognition of this mutual hardship, Union General Banks offered extremely lenient terms to the surrendered garrison by saluting Confederate General Gardner on his surrender and refusing to take his sword. In addition, he also paroled all the enlisted Confederate troops and only kept the Confederate Officers for exchange purposes with captured Union Officers.

With the loss of Port Hudson (thereby control of the Mississippi river) within the same week as both the loss of Vicksburg and the defeat at Gettysburg, the Confederacy was struck a mortal blow from which it never recovered.

The above article appeared in the ACWS Newsletter, Summer 2012