While Yorktown is most significant for the Revolutionary War siege of 1781, which effectively ended the conflict, during the American Civil War was again the site of major siege operations during the Peninsula Campaign of 1862.

As the Civil War entered its second year, President Lincoln favored an attack on Richmond from the vicinity of Washington, DC. But the commander of the Army of the Potomac, Major General George B. McClellan, persuaded Lincoln that a move on Richmond up what it known as "The Peninsula" was a better approach. Virginia's York and James Rivers, which formed the Peninsula, would enable the Union navy to support the land campaign. And the Union army still held Fort Monroe at the tip of the Peninsula -- giving a base from which to begin operations. The Confederate leaders, however, had planned for this Union offensive. In 1861, Major General John Bankhead Magruder, commander of the Army of the Peninsula, began constructing defensive lines across the peninsula. He anchored his left flank at Yorktown, improving and strengthening existing Revolutionary War fortifications. From Yorktown, 12 miles of new earthworks spanned southward to the Warwick River and then continued along the Warwick River for several miles before angling westward and ending at the James River. Magruder also made effective use of the terrain, using dams to flood the lowlands. He fortified the dams with earthworks and troops. 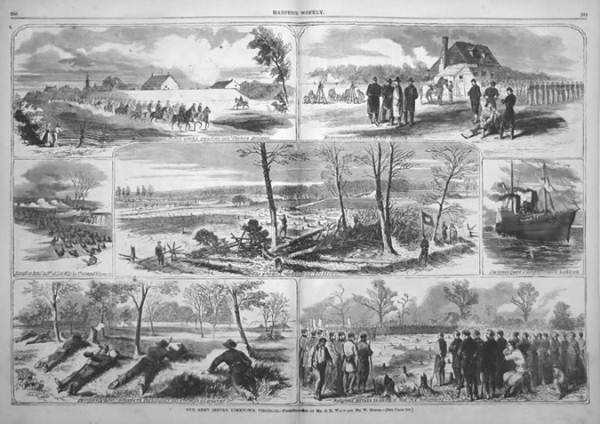 Siege of Yorktown as published in Harper's Weekly 1862

Initially, Magruder had only 11,000 men to hold his entire line. General Robert E. Lee, serving as military advisor to President Jefferson Davis, saw the need to reinforce Magruder's line while General Joseph E. Johnston insisted this line be abandoned and Magruder's troops be concentrated with others in a closer defense of Richmond. Lee's ideas prevailed. As the Union army advanced on Yorktown, Magruder's strength was increased. On April 12, 1862, Magruder's Army of the Peninsula was consolidated in to the Army of Northern Virginia, with General Joseph E. Johnston in command. Magruder now commanded a wing of Johnston's army which ultimately grew to 56,000 troops.

In April 1862, McClellan reached Fort Monroe, where an armada of almost 400 vessels had delivered his army of over 100,000 troops. After making a reconnaissance of the Confederate line and with intelligence reports projecting southern forces as large as his own, McClellan decided to lay siege to Yorktown. Brigadier General Fitz-John Porter was placed in charge of siege operations and work on Union fortifications began. Meanwhile, Magruder, and later Johnston, kept improving the Confederate defenses. Rainy weather favored the defenders. Magruder's dams turned small streams into major barriers. However, the Union army made advances and prepared more positions. Minor forays gave new soldiers combat experience and broke the monotony of the siege. A serious threat came on April 16 when a Union assault tried to force the Confederates to halt work on their defenses at Dam No. 1 near Lee's Mill, several miles from Yorktown. At one point, in a balloon operated by Professor Thaddeus Lowe, General Fitz-John Porter made an observation flight over Confederate lines. When the mooring broke, the balloon drifted over the enemy. Before the Confederates could fire on Porter, a changing wind carried him back to his own lines. Despite this problem, Professor Lowe continued his observation flights. This was an early step in the development of aerial reconnaissance.

Despite harassing fire, McClellan's troops slowly advanced their siege works and artillery. The Union arsenal of 101 siege guns included Parrott guns ranging from 20 pounders (weight of the shell) to 200 pounders. There were over 40 siege mortars, the largest being the 13 inch seacoast mortar which weighed almost 9 tons and fired a 220 pound shell. Never before had so much artillery been massed in one place in the history of the world.

While Union field batteries fired continuously during the siege, only one siege battery fired on the Confederates. McClellan planned to open his artillery barrage on May 5, concentrating his efforts at Yorktown and along a portion of the Confederate line just outside Yorktown. The plan also called for Union gunboats to give supporting fire from the York River. 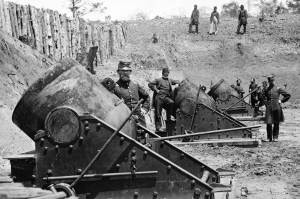 McClellan, to the irritation of some, always insisted on thoroughness in planning and preparation, and the Peninsula Campaign was no exception. He overestimated his foe's strength and suddenly Johnston, in the face of superior numbers and firepower, forfeited the ground as untenable. As early as April 30, Johnston had planned to withdraw. Around midnight of May 3, the Confederate heavy guns had ceased their diverting fire, were spiked and left behind by the retreating army. At Federal Artillery at Yorktown dawn on the 4th, the Union army discovered Yorktown abandoned. However, the Confederates had left behind a new weapon of war -- land mines, which claimed the lives of several Union soldiers.

The Confederate withdrawal was well planned and executed. A mile east of Williamsburg, Magruder had built another fortified line. Johnston elected to delay the Union pursuit here. On the afternoon of the 4th, the Battle of Williamsburg began, lasting into the next day. Confederate casualties for the battle were 1,600, while Union losses were 2,300. On May 6, Johnston resumed his march towards Richmond.

By delaying the Union army for almost a month, the Confederates had obtained valuable time to assemble and organize the forces that eventually beat McClellan back from the gates of Richmond and thwarted the Union's Peninsula Campaign. On August 26, 1862, General George B. McClellan and most of the Army of the Potomac left the Peninsula. Some regiments were left behind at Yorktown.

Yorktown remained in Union control for the rest of the war and was maintained as a military garrison until the summer of 1864. In 1863, forces from Yorktown participated in what is known as the Second Peninsula Campaign against Richmond. The following year, almost 40,000 troops of the Army of the James used Yorktown and Gloucester Point (across the York River from Yorktown) as a staging area for the Bermuda Hundred Campaign. Later in 1864, during the start of the Petersburg siege, Major General Ulysses S. Grant ordered Yorktown abandoned.

The above article appeared in the ACWS Newsletter, Autumn 2012