Sky Blue Trousers in the Army of Northern Virginia

In the film "Gettysburg" virtually every Confederate soldier seems to wear sky blue trousers. This film is hardly the most authentic as far as uniforms are concerned, but apart from a few incidents of Confederate Soldiers capturing Federal pants just how likely would it be for soldiers in Lee's army to wear sky blue or royal blue trousers? Confederate Infantry Regulations published on June 6th 1861 called for sky blue trousers for enlisted men. Prior to 1862 the Richmond Clothing manufactory made a large percentage of the trousers in Sky Blue and Grey Kersey. However more and more of this quality Kersey was sold to officers and it became increasingly rare in enlisted men's clothing.

From early 1862 most of the cloth used for making trousers was jeans and cassimere, but some woollen kersey was manufactured domestically. Made by such firms as the Danville Manufacturing co, and the Crenshaw woollen mill, both of whom were located in Virginia. It was probable blue woollen trousers were still being produced through this period. By October 1863 large amounts of Sky Blue and Royal Blue woollen Kersey began to arrive at the Richmond Depot.

A receipt ledger at the end of 1864 shows cloth from England coming into the Richmond Depot. Cloth listed as "English Blue Cloth" "Pilot Cloth" "Blue Trowsering" "English Blue-Privates" In fact these blue cloths were the second largest imported from England behind the blue/grey kersey.

There are also references from the ledger to "sky blue" cloth in smaller but still substantial quantities, probably similar to Federal blue and probably used for trousers.

Surviving examples of blue trousers made by the Richmond Depot include a pair worn by Private Henry Redwood who served in the 3rd Virginia local Defence Troops. They are sky blue woollen kersey cloth, with inner facings and pockets of light brown cotton Osnaburg with Japanned tin buttons.

Another pair belonged to CpI T.V. Brooke of the Richmond Howitzers issued to him in 1864. Again sky blue wool kersey, inner facings and pockets of off white cotton, again with japanned tin buttons. Both these pairs of trousers are virtually identical.

Yet another surviving pair belonged to Private Alfred May of the 61st NC INF The 61st NC only served briefly with the ANV from Oct-Dec 1864. This must have been when May received the trousers, as they have striking similarities to Richmond Depot issue. Again sky blue in colour they are crudely made woollen pants; they have a back belt associated with the Richmond Depot Japanned tin buttons and off white inner facings and pockets, again virtually the same as the previous two pairs. 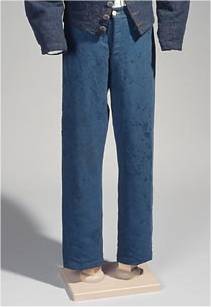 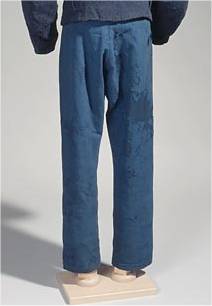 An Illinois Infantryman who talked to some pickets of a South Carolina Regiment in 1863 described them as "better dressed than we are, their uniforms being apparently new". The Carolinians uniform is bluish grey with sky blue pants and according to D. Augustus Dickert Co H 3rd S.C. their uniforms consisted of a "dark blue jackets closely fitting, with light blue trousers".

It was however becoming increasingly dangerous to wear these light blue pants with a blue grey jacket. On September 21st 1864 a letter written by A R Lawton Chief Quartermaster to J B Ferguson Chief Purchasing Agent in Britain stated "you need not contract for blue cloth for pants, as the grey makes up to more advantage". So unofficially the making of blue trousers was at an end but how many blue trousers were still made from remaining blue, or royal blue cloth is unknown.

Confederate regulations published in June 1861 specified sky blue trousers for enlisted men. This policy was not dropped until at least September 1864. Judging from extant pairs and written evidence it is obvious many Confederate trousers were made from sky blue kersey, or one of several shades of medium to "dark royal" blue kersey or "blue trowsering". These trousers were Richmond Depot issue made in the RD pattern, which copied the popular civilian trousers of the day, including a belt and buckle for adjustment. However to wear federal blue trousers is to largely be avoided.

It did happen but the purpose of this article is to debunk the myth that all Confederate trousers were made of grey or brown jeans or cassimere. Yes, for the most part they were, but Richmond Depot produced blue trousers did exist and probably in substantial numbers. Fact or fiction? -Definitely a fact.

The above article first appeared in the ACWS Newsletter, Summer 2006