An Overview of the Man
The Company
and The Uniforms

Peter Tait was born in Lerwick, Scotland in 1828 and married into the Abraham family of Limerick, Ireland.

Dismissed as an "unprofitable servant" from a local company, he quickly spotted the opportunity, brought about by the new sewing machines. In 1852 Tait set up one of the first mass production textile factories in Europe, from which he sold shirts and other clothing.

His big break came with the outbreak of the Crimean War in 1854 where Tait won contracts to supply the British army with uniforms.

By the time of the civil war he had a large factory in Limerick that were described as a set of "mean cheap buildings" which employed at least nine hundred operatives.

He also had another factory in London near Blackfriars Railway Bridge. This factory had painted on it in enormous letters "Tait and Co Army Contracts".

In late 1863 the firm contracted with the Confederate Government for the supply of jackets and trousers.

At least seven jackets made by Tait are known to survive. Most Tait jackets and trousers were issued to the Army of Northern Virginia although a large number were issued to units in the Army of Tennessee and the Garrison Units along the East Coast.

"Four months ago a contract between the State of Alabama on the part of QM Gen and Peter Tait and Co for thousands of uniforms for Alabama soldiers. Partially cut with trimmings to be made up by tailors and seamstresses of our home factories. This contract has now been partially filled with the remainder due any time."

All the Tait jackets had an eight button front, with five piece bodies, with no back centre seam, 2 piece sleeves and were marked in the lining with British Army size markings.

All the linings were made of Irish linen with a vertical pocket in the left breast. Another characteristic of the jackets was the double row of machine stitching on the button side.

Original buttons were the Olde English Script "I" and were black marked "P Tait Limerick" and were characterised by a floating shank.

All Tait jackets were made of blue grey kersey used by the firm to make great coats and trousers for the British Army. Alexander Collie and Co of Manchester supplied the firm with much of this cloth.

The only major difference with the Tait jackets came with the different coloured facings and trim.

Two jackets with an A.O.T. history survive, these jackets are exactly the same and belonged to Pvt. Garrett Gouge of the 58th N.C. and Pvt. Hugh Lawson Duncan of the 39th GA.

Both had blue piping around the top edge of the collar and had shoulder tabs that were also piped in blue around the edges.

Both jackets appear to have their original script "I" buttons. 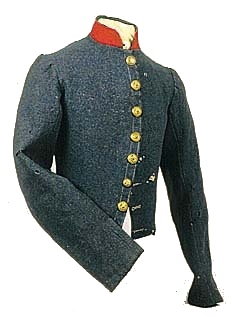 Another Tait Jacket has a rather confusing history. It belonged to Pvt. Benjamin Pendleton of the 2nd Virginia Infantry.

It has a solid red collar made of broadcloth. It has only one original button, the others are replacement C.S. Staff and Federal Eagle Buttons. It is topstitched in white thread, but why would an infantryman be issued with an artilleryman's coat?

The answer must come down to supply. The Quartermasters would issue clothing to troops in need regardless of what colour trim it had. After all it was quartermaster policy to keep the troops clothed rather than uniformed.

Another jacket belonging to Alfred Goodwin of Sturdivant's Battery A.N.V. also has solid red broadcloth facings on collar and cuffs, but these are probably post war additions. This jacket also has white machine topstitching and the original buttons have been replaced with Virginia State seal buttons, and it has been relined in cotton.

A Tait worn by a member of the 2nd Maryland Inf. A.N.V. Pvt. William Harrison is the same as the Pendleton Coat but is faced on the collar in Royal Blue broadcloth. Harrison drew this jacket on 13th November 1864.

Yet another variation is a Tait worn by a member of the 63rd Tennessee of the A.N.V., which has solid Royal blue broadcloth collar and shoulder straps.

Lieutenant Michael Glennan of the 36th N. C. of the Fort Fisher Garrison wore a Tait jacket that had had major alterations made to it.

It had been taken in, collar altered and the front cut from eight to seven buttons, although it was the original lining.

The only known Tait trousers to exist were also owned by Glennan made of the same blue grey kersey as the jackets.

They have a red (now pink) piping down the outer seams. Pockets and lining of unbleached cotton sacking with black horn buttons.

Tait not only made uniforms for the Confederacy, he also ran them through the blockade in his own steamers the Elavey, Eveline and Kelpie, none of which were captured. It is impossible to estimate how many uniforms were imported, but the bulk of the contract started to arrive in the autumn of 1864. One shipment from the Eveline containing 4,400 uniforms arrived in Wilmington on December 29th 1864 but the fall of Fort Fisher on January 15th 1865 most probably put an end to any more shipments.

After the war in December 1866 Tait was elected mayor of Limerick for which he served three terms.

In 1868 he resigned from his third term to focus on his shipping interests. He was honoured by the town with a memorial clock erected in 1867 for providing a large amount of employment in the town. He was also honoured with a Knighthood

In December 1868 he was defeated as a Conservative candidate for Parliament in Limerick in a brutal election campaign.

Tait retired from the business and left Limerick for good around 1875 leaving the factory to be run by his son. The factory was renamed the Auxiliary Forces Clothing and Equipment Company.

Tait went to Salonica in Greece to establish a Turkish cigarette factory.

The venture however proved unsuccessful and Tait died in poverty at the Hotel De France in Batoum, Russia on December 11th 1890 aged 62. He bequeathed his belongs of books, furniture and linen and the sum of just £50 to his wife Rose.

A sad end to a remarkable man