Even though the Confederate quartermaster department was a centrally controlled bureaucracy, the output of the clothing manufactories was mainly regional in nature. So, a soldier serving in the Army of Tennessee would receive clothing from the depots in Atlanta, Columbus, Athens or other depots in the deep south, whilst those serving in the Army of Northern Virginia would be issued clothing from the clothing manufactory at the Richmond depot.

Among the surviving uniforms connected to a specific army were those issued to soldiers in the Army of Northern Virginia. Mr Les Jensen, a pioneer in Confederate uniform research, called these jackets "Richmond Depot style shell jackets" Mr Jensen divided this style into three further sub-groups the TYPE I, TYPE II & TYPE III. According to appearance and time of issue, it must be remembered that these are modern terms and were not used by the Depot.

A waist length jacket with a six piece body and two piece sleeve cut full in the elbow, then tapering to the cuff. A standing collar which could have been rounded or angled at the front stood 1 3/8 to 1 5/8 inches tall. Fitted with belt loops that are sewn top and bottom with no buttons. The shoulder straps had no buttonholes, the cuff size button being sewn through the shoulder strap to the body of the jacket.

The lining was probably a cotton osnaburg with a pocket on the left hand side; there were two variants, the first a bag type pocket with a horizontal slit opening the second a bag pocket sewn to the outside of the lining and slightly onto the front facing of the jacket. The jacket had a nine button front, the front bottoms were either rounded or squared, the centre back of the jacket coming to a slight point. The distinctive point about the type I jacket is that it was trimmed on the collar, cuffs and shoulder straps with either piping or tape. The type I jacket can be identified as being used by February 1862, however a few may have been issued as early as November 1861 as the clothing manufactory were producing these jackets in October 1861.

Richmond Depot Style Jacket - Type I.
Issued as early as November 1861 through Fall 1862. 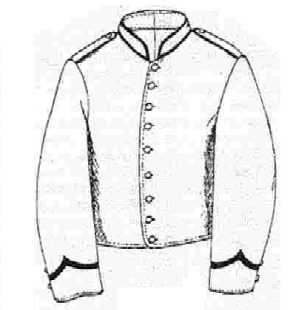 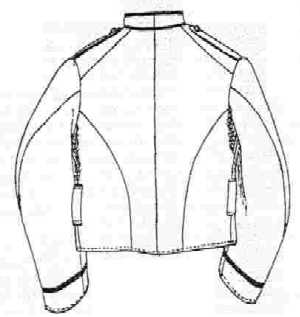 The type II jacket was probably issued as early as the spring of 1862 until at least mid 1864, (see the well known view of Confederate prisoners captured at Cold Harbor in June 1864, in which the majority wear jackets with shoulder straps and belt loops).

The type II jacket shared the same basic features as the type I including a six piece body, a standing collar and two piece sleeves. They also had shoulder straps and belt loops, lined with osnaburg and had an inside pocket. These jackets were also made with a nine button front, but some were made with 6, 7 or 8 being the most common after 9. In the early stages of production it was probably made concurrently with the type I, since, after all, it is only a type I without the trim. Gradually however, it superseded the type I to become the only pattern produced. Latter jackets produced around 1864 were made without belt loops, it also appears that some soldiers deliberately cut off their shoulder straps, the ends of these can be seen still in the shoulder seams of a few surviving jackets.

This was probably part of the reason for their deletion from the final style of issue jacket by the Richmond Depot the type III. 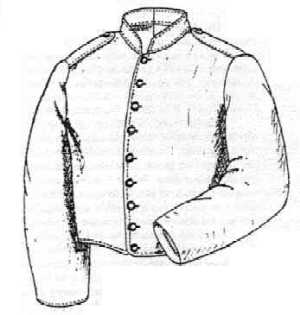 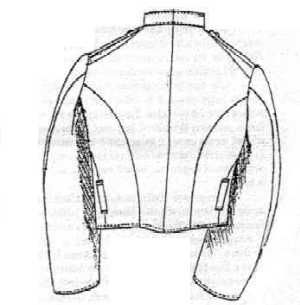 The type III Richmond jacket was likely first issued the winter of 1863 or early spring 1864 through to the end of the war. This pattern of jacket is identical to the type II except that it lacks shoulder straps and belt loops, otherwise the pattern, lining, button count and other characteristics are the same as the type II, apart from the normal variations in collar, pockets and jacket fronts as seen between the other two types. These jackets were all made from the dark blue-grey wool kersey brought from England through the blockade. Small amounts of this cloth were received sometime in late winter 1863, large quantities were not available until Spring 1864. 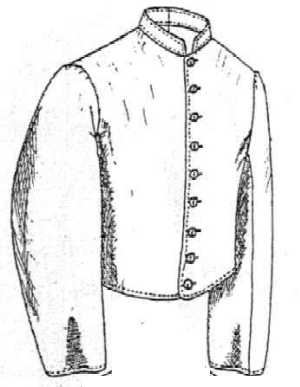 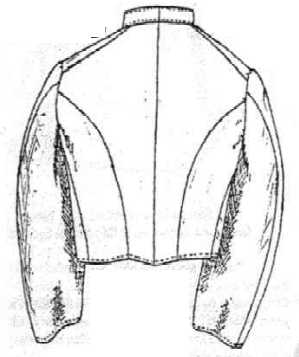 Although sewing machines had been in existence for around twenty or so years and some were used in the manufacture of certain items of clothing, the large majority of the jackets made were completely hand sewn. As the jackets were individually hand assembled by a seamstress, they would exhibit differences in finishing and details. For example different finishing techniques would lead to the number of buttonholes to vary, the top stitching and buttonholes would be sewn differently and show various differences in quality. The jackets would overall retain a similar appearance but would show various differences in quality and details.

Solid cast "I", "A", & "C" buttons in brass-copper alloy were most commonly used, state buttons were not used by the clothing manufactory, the CSA button is rarely seen. Wooden buttons were used on jackets and other clothing, but not in large numbers till early 1864, the most used button after the solid cast buttons was in fact the U.S. general service button.

Bibliography and other research sources:

Above article originally published in the ACWS Newsletter, June 1999