First The Model Information Calibre .58, rifled with three broad bands and grooves. Length overall 56 inches (142.2cm). Weight 8lbs 12oz. The lock plate is case hardened in mottled colours and is flat with beveled edges being recessed into the stock. (Fig.1. and Fig.2), to bevel height. The flat faced hammer is heavily bevel led, is also case hardened and of entirely new design. The plate on the Springfield is marked forward of the hammer with a spread eagle, and beneath, in two lines, "U.S. / SPRINGFIELD". The date "1863" is to the rear of the hammer. The black walnut oil finished stock is 53 inches (134.5cm) long and has a 9-inch (23cm) comb. Except for the elimination of the band spring recesses (Fig. 10 A & B) and the enlarged ramrod channel at the rear of the fore-tip, the stock is identical to the 1861 1855 model S rifle muskets. Inspectors initials are in the left flat (Fig. 4) opposite the lock. In a very few known instances, stocks for this arm have been noted which are stamped in the butt with a large spread eagle over "Whitney Arms Co", indicating that on occasion, Springfield turned to outside contractors to supply various parts for the completion of it's arms. The 40-inch (101.1cm) barrel is finished bright, and has an iron blade front sight mounted atop the bayonet stud, 1 3/16 inches (4.5cm) from the muzzle. The two-leaf rear sight (Fig. 5) is blued in some instances and bright in others, and is graduated to 500 yards. This is located 2¾ inches (7cm) from the breech, dove tailed at the rear and held by a round spanner screw (Fig. 10B) near the front of the base (Fig. 5A). The flat-faced bolster is without a clean out screw, and is stamped with a small spread eagle as shown in (Fig. 2). The upper left barrel flat (Fig. 4) carries the usual "V/P eagle head" proof marks with the date "1863" stamped on the top flat. The muzzle is finished in a crowned or rounded surface instead of flat as on the model 1861. The 2-inch (5.1cm) barrel tang is unmarked. All furniture is iron. The bright fore-tip is secured by a small screw through the stock. The 3½ inch (2cm) wide barrel bands (Fig. 10) are either blued or bright with both finishes being noted on various parts of this arm. As shown in Fig. 1, the barrel bans are of split oval type, each being retained by a clamping screw, and each bearing the assembly letter 'U' (Fig. 1) on the right side. The middle band carries the upper sling swivel on the clamping screw, with the lower swivel being located on the forward arm of the trigger guard bow. 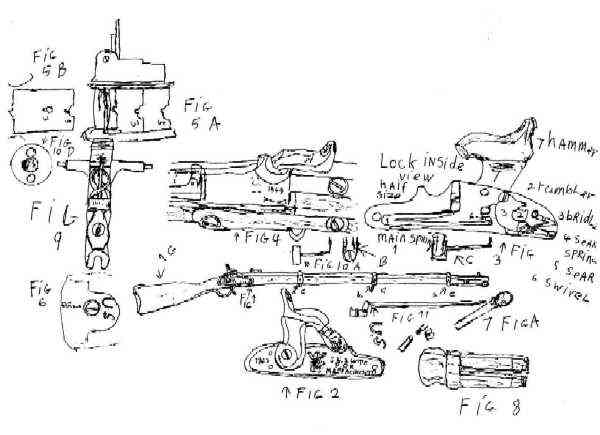 These may be encountered with either blued or bright finishes. The trigger guard plate is bright, 7 ½ inches (19cm) long, with rounded ends. The guard bow is either blued or bright and is retained to the plate by two round spanner nuts (Fig. 10D), while the trigger is slung on an integral split lug within the guard plate. The curved butt plate (Fig. 6) is 4½ inches (11.5cm) long, is finished bright, and is marked "US" on the tang. The tulip headed Fig. 7A and B has a straight shank, and is secured into position beneath the stock by a "spoon" spring pinned in a recess in the stock beneath the barrel, reverting to the method previously used on the US model 1842 musket. The Socket bayonet (Fig. 11) for the model 1863 rifle musket is identical to that furnished with the models 1855 and 1861 arms, being 20 15/16 inches (53cm) long overall, with an 18 inch (45.6cm) blade marked "US" (Fig. 11) and a 3 inch (7.6cm) socket fitted with a clamping ring. The model 1863 rifle musket was officially approved and adopted on February 9, 1863, after an initial inquiry into the matter in April 1862. And although essentially a modification of the preceding model 1861, was brought about as a result of the Colt's special model 1861 rifle musket which included many of the features adopted in the model 1863, Type 1. These included the straight shank ramrod (Fig. 7) retained by a spring oval, split clamping bands held by screws and the consequent deletion of band springs; the shorter nipple bolster (Fig. 2) with the elimination of the clean out screw, and; the re-designed hammer which, with the lock plate was left in natural case hardened colours, other than details concerning finish to the various parts. And the rear sight, which was adopted on the 1861 Springfield from 1862, came from the Colt model 1861. (Fig. 10D)

These were the primary differences between the special model 1861 rifle musket produced exclusively under contract and the regulation model 1861 as produced at Springfield and by most contractors. Aside from these changes and the blued finish applied to some parts of a portion of the model 1863 rifle muskets, the arm remained much the same as it's predecessors. It should be noted that the model 1863, Type , produced at Springfield only during that year, for not only were the changes for this arm approved on February 9, 1863, but subsequent changes initiating another variation U.S. model 1863, Type (Fig. 5B & Fig. 10C) were approved on the 17th of December. During 1863, a total of 273,265 model 1863, Type rifle muskets were turned out at Springfield, establishing a new production record for any U.S. armoury. In addition to this number a relatively small quantity was produced by a few of the contractors who had initially undertaken the manufacture of the model 1861 rifle muskets, but who apparently modified their production to conform with the changes at Springfield. Although no Government contracts are known which specified the model 1863 arm, it is know that they were produced by such contractors as Alfred Jenk & Son; William Mason; Norris & Clement; E Remington & Son and the Savage Revolving Fire Arms Company. These and possibly a very few others manufactured model 1861 rifle muskets but in relatively small quantities. During it's life span, which lasted less than a year, no changes are known to have been incorporated into the U.S. model 1863 rifle musket, until 1863 when a variation to the model was introduced. (Fig. 10C & 5B)

Tompions (Fig. 8) were regulation equipment at the time, and the soldier was required to keep the tompion in the gun barrel at all times when his gun was not in use. These tompions were selected with considerable care as indicated by the following U.S. armoury. March 2, 1858, Col. H K Craig U.S.A. Ordnance, Springfield, Washington D.C.

Sir, I beg to suggest in reference to the wooden tompions, I am apprehensive that if made of hickory, they will by lying on hand for any length of time "powder-post" or "dry-rot". Maple will be less subject to this evil and black walnut entirely free from it. If the black walnut will answer, we have condemned stocks enough to supply all we shall want, but if hickory is required, we must order the timber. I remain Sir, your obt servt James S Whitney, Supt. US Army, Springfield April 24, 1858.

Sir, I have the honor to reply to yours of 20th inst. that by reference to my letter of the 2nd ult. you will observe that we then recommended the use of maple or black walnut for tompions. I have since receipt of your covering letter of Supt. Clowe, consulted our most reliable workmen and all agree that maple or black walnut will prove much better than hickory. We regard maple as the better timber of the two but deem black walnut to be sufficiently strong, and as we have condemned stocks from which they could be made, we advise the use of blk, walnut. The maple timber, if adopted should be the "hard" or "Rock" maple. We advise that each tompion have inserted at the mouth of the for, a small wedge, so that in seasoning they shall assume a proper shape and that they be packed in boxes with wedges inserted. We send this day a sample of each kind of timber, prepared as we propose, by mail. We agree with Mr Clowe in the opinion that hickory will warp and what in our judgment is worse, we think is its liability to "dry-rot". Waiting your instructions I remain your obt. servt. James S Whitney Supt.

The Ordnance inspectors set up a system of classification and fixed a price for each class as follows: -

The above article first appeared in the ACWS Newsletter, April 2000.