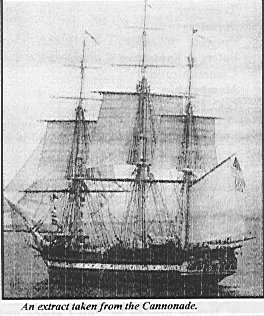 On July 20 1997, in commemoration of her 200th anniversary (and after a four year, $12.5 million restoration - her seventh), the USS Constitution, nicknamed "Old Ironsides" set to sea under her own sail power for the first time in 116 years. The oldest commissioned warship in the world, she is the reigning champion among the US Navy with 42 victories in 42 engagements, sinking or capturing 32 ships. No other ship can match that record. Even more interesting is the fact that no shot ever even penetrated her hull. The three-masted, 44-gun frigate was also the First US warship to defeat a British vessel. Three cheers to Old Ironsides!

The above article first appeared in the Cannonade and was reprinted in the ACWS Newsletter, October 1997