Step back in time and walk in the footsteps of Union and Confederate troops along the recently unveiled North Carolina Civil War Trails, tracing some of the war's most important histories sites using maps, markers and directional signs. North Carolina joins Pennsylvania, Maryland, Virginia and West Virginia as part of the overall Civil War Trails project.

North Carolina played a pivotal role in the war and was the site of significant events leading to the final surrender. Over 100 interpretive markers throughout North Carolina are to depict significant Civil War events such as Sherman's Carolina's Campaign, Stoneman's Raid and the war's end. 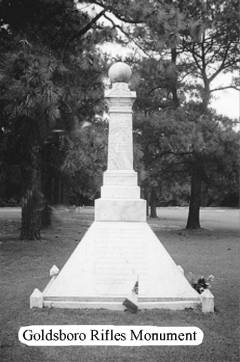 Along the North Carolina trails, visitors will discover details about coastal forts and ironclad ships, vast battlegrounds and stately plantations.

The last major battle of the Civil War was fought in central North Carolina at Bentonville, where Union Gen. William T Sherman's fiery march northward from Savannah was met by Confederate troops in a last ditch effort to stop the advance. The South's defeat here essentially ended the war and was followed at Bennett Place, near Durham. A large scale re-enactment takes place every five years at the state historic site there.

Elsewhere along the trails, you'll see the site of the world's largest combined waterborne assault until the Normandy Invasion of World War 11 as well as what is perhaps the only formal burial ground where Union and confederate troops are laid to rest side by side.

All along North Carolina Trails, you'll discover the history of a war that forever changed a young nation.

North Carolina was forever affected by the Civil War. Even the state's nickname, the Tar Hell State, has its roots in Civil Wear history. Although reluctant to secede from the Union, North Carolina sent troops and materials and suffered more losses than any other Southern state.

As President Abraham Lincoln was giving his inaugural address on March 4th 1861, a storm cloud hovered over the nation he was preparing to lead. For at least a decade before that day, the country had been split in half, North against South, quarrelling over a way of life that some called necessity and others atrocious.

Most North Carolinians had grown up to accept slavery as a way of live. Cotton an tobacco farmers relied on slave labour during planting harvesting seasons and for heavy and dangerous work. Though many North Carolinians discussed the possibility of leaving the Union if a Republican President were elected, the majority rejected the idea. However, the October 1860 Republican nomination of Abraham Lincoln to oppose Democrat Stephan A. Douglas and Whig John C. Breckinridge revived their apprehension. November's election results increased the possibility of Southern secession.

North Carolina watched as more and more Southern states left the Union, Virginia left, then Arkansas, then Tennessee. The separated states formed the Confederate States of America (CSA), creating their own flag, electing Jefferson Davis as their President and printing their own currency.

Undecided, North Carolina's governor waited until the first shots were fired at Fort Sumter and President Lincoln issued a formal declaration of war. On May 20th 1861, North Carolina became the last of the Southern States to join the Confederacy rather than send troops to fight against her neighbouring states.

With an army about half the size of the Union forces, North Carolina's generals did their best to defend their state from Union invaders. After four years of fighting across the state and hundreds of thousands of human losses, Fort Fisher, on the southern coast of North Carolina, finally fell on January 15th 1865, thus closing Wilmington and the Confederacy's last major blockade-running seaport.

Later that year, the battle of Bentonville, fought march 19th-21st 1865 was the last full scale action of the Civil War in which a confederate army was able to mount a tactile offensive. The massive battle, the largest fought in North Carolina, was the only significant attempt to defeat the large Union Army of Gen. William T Sherman.

To learn more about North Carolina's role in the Civil War and experience North Carolina Civil War Trails, take a moment on www.visitnc.com to enjoy the sites new Civil war Experience, entitled And the Last Shall Be First.

The above article first appeared in the ACWS Newsletter, Spring 2006