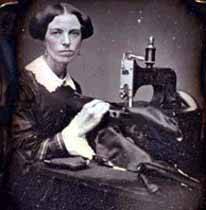 I have always been told that sewing was done by hand in the 1860's. That Button hole machines didn't exist, yet when looking for some patterns for Civil War period clothing, I came across the items following. I don't know if they were used but they existed!

The unidentified subject of this daguerreotype (ca.1853) sits behind an industrial model Grover and Baker sewing machine.

Whether originally produced as a promotion for the machine's manufacturer, an illustration of the clothing industry at the time, or a portrait of a proud seamstress displaying the tools of her trade, this daguerreotype is one of the few surviving visual documents of working women in the United States before the Civil War. 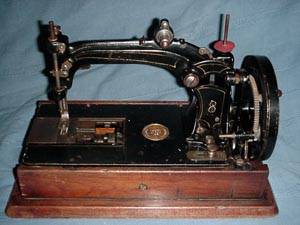 Established in 1853 in Connecticut as the Wheeler and Wilson Manufacturing Company, Allen B. Wilson patented both the rotary hook (1851) and four motion feed (1854). The Company opened an office in England in 1859. A range of machines were produced, the No. 2 was for shirts, collars & cuffs, the No. 6 Bed & Cylinder machine for Special Work, the D10 for General Manufacturing, Leather work and Tailoring, there was also an Automatic Buttonhole Machine In 1862 the Company was producing 30,000 machines a year, by 1865 this had increased to 50,000 a year and by 1871 yearly production reached 93,500 machines of various types. Production continued to increase and by 1876 had reached 109,000 machines a year Singer took over the Wheeler and Wilson Company in 1905.

The above article first appeared in the ACWS Newsletter, October 2002.