The following is an after action report of a snowball fight between the Third & Fourth Vermont and the Twenty-sixth New Jersey. Black eyes, bloody noses and all!

A snowball Battle - A soldier of one of the New Jersey regiment writes as follows:

"You are probably aware that the Second Brigade of this division consists of four Vermont regiments, besides the Twenty-sixth. During the late heavy fall of snow, the Vermonters twice made an attack on the encampment of the Twenty-sixth, sending a perfect shower of snow balls at the head of every luckless Jerseyman who made his appearance without his tent. The first attack was a complete surprise to us; but we essayed a sally from the camp, and drove the attacking party back to their reserves. Being heavily re-enforced, they charged on us again, and after a desperate resistance we were driven back into camp, fighting absolutely from the shelter of our tents until darkness put an end to the contest. Our casualties were quite heavy, but those of the enemy, it is thought, exceeded ours. A few days afterwards the attack was renewed, but we took up a strong position on a hill in the rear of the camp and repulsed every assault of the foe. The snow crimsomed with blood issuing from the olfactory organs of the Vermonters, and the appearance of the battle-field indicated the fierce nature of the contest. The enemy raised a flag of truce, an armistice of a few hours was concluded, and then ensued that novel spectacle of war - men, who but a few minutes previous were engaged in one of the most sanguinary battles of modern times, harmonizing and fraternizing with clasped hands.

"But the matter did not rest. The night of the 24th had enveloped terra firma with its dusky shades. Many a waxen nose in the camps of the Second brigade snored sonorously, happily unconscious of its ruby discoloration on the morrow. Many an eye placidly closed in slumber was to be violently closed in battle ere the approach of another nightfall. And many a phrenological bump sparsely developed on the night in question was to be suddenly brought to an age of puberty on the approaching day. The eventful morning opened. Colonel Morrison sent a challenge to Colonel Seaver of the Third Vermont to engage in the open field at three o'clock P.M. The challenge was accepted, on the condition that the Fourth Vermont should be included with the Third. This was agreed to by the Colonel. Before the appointed time some of our men were detailed on fatigue duty, and at the time of the engagement we were only able to muster some three hundred men. 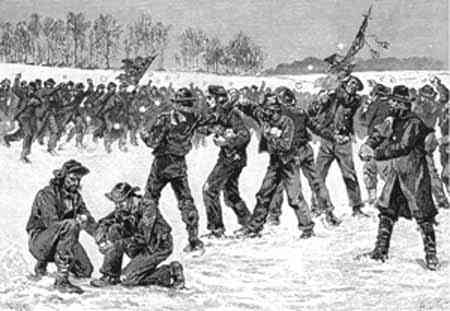 "Nothing daunted by the superiority of numbers, Colonel Morrison ordered Lieutenant MeCleese of Company C (Captain Pemberton being sick) to fortify a small hill on our right, make as much ammunition as possible, and pile the snow balls in pyramids. This arduous duty was hastily performed. It was a strong position, a swollen brook at its base answering the purpose of a moat - too strong, in fact, for the Vermonters. The hills were covered with spectators, and the eagerness to witness the novel contest knew no bounds. Companies A and B were thrown out as skirmishers. Company E occupied the right, C was given the centre, and H rested on the left. The Colonel dashed over the field in all directions, encouraging the men to stand fast, amid the blue wreaths curling from a 'brier wood' nonchalantly held in his left hand, and the Adjutant danced about on a spirited charger, apparently impatiently awaiting the hour of contest, the light of battle dilating within his eyes, and a quid of 'navy plug' reposing beneath his cheek. Lieutenant Woods, of the ambulance corps, and Lieutenant __ acted as mounted aids to the Colonel, while the 'Sergeant' and John K. Shaw, an aspiring Newark youth of eighteen, acted as perambulating aids. The line being formed and everything in readiness for the contest, a red flag was raised as a signal, and in a breath of time a strong body of the enemy drove in our skirmishers, and fiercely attacked our centre. At the same moment another strong force advanced against our right, but only as a feint; for they suddenly wheeled to the right, and joined their comrades in a furious charge on our centre. Major Morris ordered up Company E from our right, but too late to be of any advantage, and they were completely cut off from the main body of our army. Although flanked and pressed in front by overwhelming numbers, our centre heroically contested the advance of the enemy. Animated by the presence of the Colonel, they fought like veterans, and the white snowballs eddied through the air like popping corn from a frying pan. But the human endurance to stand such a perfect feu d'enfer any longer. Gradually the centre fell back inch by inch, the line then wavered to and fro, and finally the men broke in confusion and rolled down the hill followed by the victorious Vermonters. In vain the Colonel breasted the torrent; in vain the Major urged the men to stand fast; in vain the Adjutant White, the chivalric De Bayard of the Twenty-sixth, implore the gods for aid.

"The boys never rallied. Lieutenant Woods made an attempt to rally them and form them in hollow square on the fortified hill to the right, but he was mistaken by the boys for a Vermonter, and unceremoniously pelted from their midst. But the Colonel was not totally deserted by his men. The Vermonters seized his horse by the bridle, and made a desperate attempt to take him prisoner. The fight at this point was terrific beyond description. The men fought hand to hand. Colonel Seaver, the Achilles of the day, dashed through the combatants, seized Colonel Morrison by the shoulder, and called upon him to surrender. But his demand was choked by the incessant patter of snow-balls on his 'physog.' Around the rival chieftains the men struggled fearfully; there was the auburn-haired Hodge, alias 'Wild Dutchmen' fighting manfully. There was the fierce Teuton Captain of Company E, dropping the foe right and left at every swing of his arms; but all in vain. Amid the wild excitement consequent upon the shouting, the rearing, and plunging of horses, the Colonel was drawn from his saddle and taken by the enemy. Most of his 'staff' followed him as prisoners. A desperate attempt was made to rescue him, but it proved of no avail. Major Morris fared no better. Adjutant White, however, made a bold attempt to retrieve the fortunes of the day. Dashing into the dense ranks of the foe, he seized the bridle of Colonel Stoughton's Bucephalus, and gallantly attempted the impossibility of capturing the Colonel, who was the acting Brigadier of the attacking party. But the adjutant had 'caught Tartar,' for the Vermonters rushed around him like the waves beating upon some lone rock in the ocean, and vainly clamoured for his surrender. He fought like an Ajax mounted on a 'Black Bass', retaining his position in the saddle by resting his knees against the pommel. This was at last observed by a shrewd Yankee, who detexrously slipped between the two horses, detached the supporting knee, and the Adjutant fell from his lofty position like a tornadostricken oak. This fall disheartened the Twenty-sixth, and only detached parties of a dozen, scattered over the field, persisted in an obstinate resistance. The 'Sergeant' received a solid shot in the back of the head, and was borne to the rear a captive, and then

"Thus ended the great battle of Fairview; unequalled in desperateness, and the theme of many a future poet's cogitations. Our loss was very heavy, and we were severely defeated. The spectators, acting on the well-known principle of kicking a man when he is down, pitched into us most unmercifully when our centre was broken, and prevented us from re-forming in line of battle. The slaughter of the enemy was fearful, and the prowess of the Newark ball players and fireman was displayed on their battered visages. Colonel Stoughton was honoured with a black eye, and the gallant Seaver fared but little better. The following is a fair recapitulation of the casualties on both sides:

"The Vermonters fought with the determined energy characterizing them when engaging Jeff's myrmidons."

The above article first appeared in the ACWS Newsletter, Winter 2011.