HISTORY OF THE
U.S. CHRISTIAN COMMISSION

Soon after the start of the Civil War, YMCA leaders became concerned with the religious and spiritual needs of the soldiers in the nearby camps. Vincent Colyer, a member of the New York City YMCA, had begun spending time visiting nearby encampments where soldiers were stationed temporarily on their way to the battle front. Colyer mingled with the soldiers, offered words of encouragement, and handed out religious tracts. Since few camps had chaplains, the chaplaincy then being in its infancy, Colyer's ministrations were welcomed by both the soldiers and their officers. As a result of these activities, and the apparent need to extend them, the New York Association established an "Army Committee" with Colyer as chairman, with its mission to provide preaching services, individual religious visitation, and publications for soldiers. In November, 1861, at the instigation of members of the board of the New York City YMCA, a special convention of fifty delegates representing fifteen YMCAs met in New York. A "Christian Commission" of twelve members was appointed to devise a plan for the Associations to act as a clearinghouse for all religious work in the armed forces. The work of the Commission was organized at the national level. Local Associations were encouraged to support the Commission while maintaining their own activities. Many Associations merged into local branches of the Christian Commission or resolved themselves into army committees in order to facilitate the work of the Commission. The national organization established an office in Philadelphia and the Associations of Baltimore, Boston, Buffalo, Chicago, Louisville, New York, St. Louis, and St. Paul became regional clearinghouses for the various activities channeled through the Commission. George H. Stuart, founder and first president of the Philadelphia Association, and then chairman of the YMCA's Central Committee, was designated as Chairman of the Commission, a post he held throughout the war. The method of operation was the appointment of "delegates" who served on a volunteer basis for terms averaging six weeks.

The general aim of the Commission was "to promote the spiritual and temporal welfare of the soldiers in the army and the sailors in the Navy, in cooperation with the Chaplains." Its early activities included publication of a collection of familiar hymns, bible readings and prayers, devotional meetings in the camps, the organization of of a "working Christian force" in every regiment, and aiding and supporting chaplains. Though originally devised to provide spiritual sustenance, the activities of the Commission soon expanded into the physical and social realm, making the Commission a valuable agency of wartime relief. A newspaper report of its first annual meeting described the objects of the organization as, "the promotion of the intellectual, moral and religious welfare of the Army and Navy, buy suggesting needful national legislation and administration, securing well-qualified chaplains, encouraging Sabbath observance, promoting temperance, multiplying libraries, reading-rooms, and gymnasiums, and endeavouring to arouse the sentiment of the nation to a sense of its obligations to this class of citizens. Delegates, serving both at the front and behind the lines, established tents as social centres with stationery and periodicals provided, distributed emergency medical supplies, food, and clothing, and operated canteens and lending libraries. A special work of compassion performed by delegates of the Commission was the assembling of records of those buried from prisons and in certain major battle areas. Prisoner-of-war work, which was to figure more prominently in YMCA war work in later conflicts, also began during the Civil War. 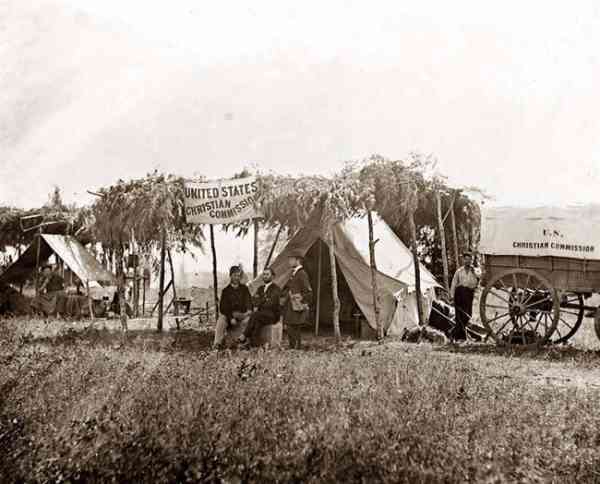 The establishment of the Commission was a pivotal moment in the history of the YMCA movement in North America, which was then just ten years old. The work of the Commission provided the medium for large-scale cooperation between the Association and the general public and was significant in creating prestige for the YMCA movement. The value of the services rendered was recognized by civil and military authorities during the war and afterward.

After the surrender of the Confederacy in 1865, the Commission continued to minister to the troops until they were discharged from military service. At a meeting of the Executive Committee in December, the decision was made to terminate the work of the Commission on January 1, 1866. During its 4 years of operation, the Christian Commission sent nearly 5,000 agents into the field; distributed 95,000 packages, which included nearly 1.5 million portions or full scriptures, 1 million hymnbooks and over 39 million pages of tract. Total monies spent during the Civil War was estimated at over 6.2 million dollars. (Material adapted from Chapter 1, "How it All Began," of Serving the U.S. Armed Forces, 1861-1986: The Story of the YMCA's Ministry to Military Personnel for 125 Years, by Richard C. Lancaster.)

The above article first appeared in the ACWS Newsletter, Summer 2010.