Cavalry Re-enactors have to pay particular attention to the risks associated with either the horse or rider falling, in fact one of the reasons why we, and the event organisers insist on double ropes and pins is because of the very real danger that a horse could slip through the fence, or that the rider could fall off near the crowd.

The horses often spin and rear up and this can sometimes unseat even the most experienced riders. Horses weigh around half a ton (500 Kg) and travel at speeds up to 40 mph this combination on wet grass can take a long time to stop.

When a rider is unseated they have to consider their own safety first - safe landing, avoid being crushed, watch out for flying sabres and carbines (which are thoughtfully attached by slings which cause them to come back and remove teeth etc). The next concern is the horse, trying to avoid injury by helping the horse balance as much as possible and keeping hold of the reins so the horse doesn't get loose and bolt - especially near the crowd 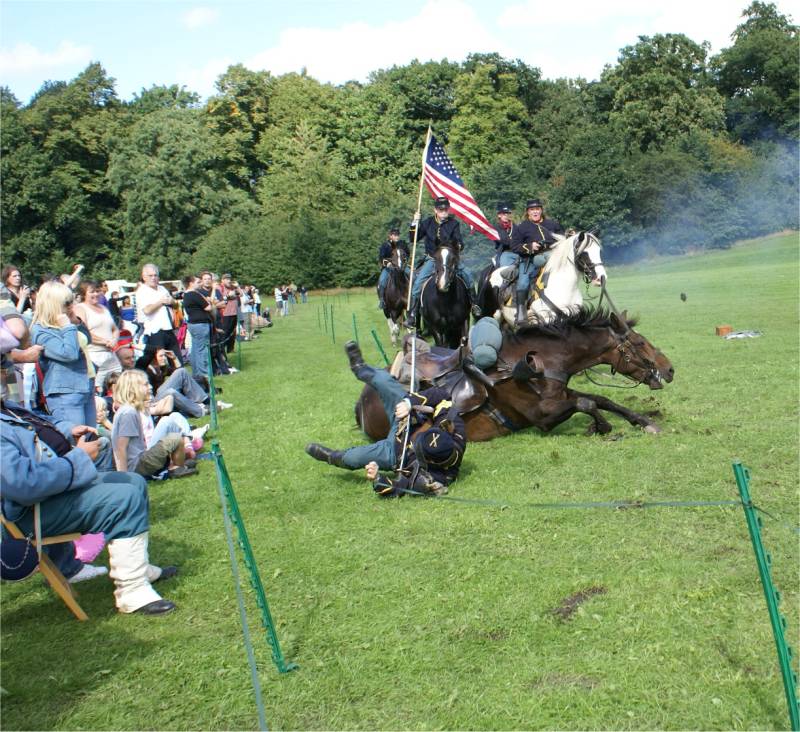 The superb photo was provide by a very alert member of the public - just look at the riders facial expressions to see how "instantaneous" the photograph was. They very kindly printed a copy and presented it to me on Monday, having found the cavalry lines first. They loved the event by the way and came back on the second day to see it all again (without the fall.)

The safety of the public is always paramount which is why we have a double barrier and as this photograph of my exciting dismount at Sheffield clearly shows why children and others should never ever sit between the two ropes.

These incidents are called "Man Down" and we have a drill which practice as part of our FSPC training to deal with the safety of both horse and rider, this basically involves surrounding the horse and rider to prevent further injuries and the horse bolting. I am very pleased to say that neither I nor Jeb (the horse) suffered any ill effects as a result of this spectacular crash landing when he unusually lost his footing and slipped but it clearly illustrates the risks. The drill was carried out properly and I was able to quickly remount.

If you look closely you can see the fence posts, carbine and sabre rotating around me - who says cavalry don't take a hit!

Incidentally many members of the public thought that this was a scripted part of the show!

The above article first appeared in the ACWS Newsletter, Autumn 2008