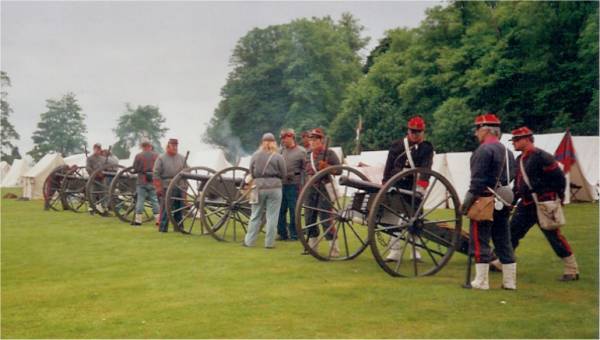 Hello, we would like to introduce you to the Rockbridge Artillery, and give you a brief history of one of the many batteries that fought in the American Civil War.

The church bells rang out over the small town of Lexington in Rockbridge County, Virginia, as young men rallied to the call to fight for their state. Many, many more would be joining them to go off to war, the Confederate States must make a stand and fight. John McCrusland, an instructor at the Virginia Military Institute (VMI), was elected Captain on April 12 1861, and three young lawyers, John Brockenbrough, William McLaughlin and William T Poague, were elected Lieutenants. Dr William N Pendleton, a rector from a small church in Lexington was called upon to drill the new recruits. Dr Pendleton, a West Point graduate who had excelled in artillery at the academy, showed his skill in instructing the troops in handling their guns. The battery, now numbered 76 officers and men, and were sworn into the Confederacy on May 12 1861.

Major General Robert E Lee, commanding the Virginia forces, ordered the Rockbridge Artillery to join Colonel Thomas Jackson. The Rockbridge Artillery, with many infantry units departed from Lexington on May 14 1861. Captain Pendleton had received permission from the governor of the VMI to take two six-pounder cannons for the Rockbridge Artillery. The cannons and men were loaded on to railroad wagons for the trip to Strasbourg, after which they marched to Winchester, and then back onto railroad wagons to Harpers Ferry. On the way they were continually gaining recruits to join the battery. They also received new uniforms, blankets, cooking utensils and knapsacks, supplied by the county.

By this time they were on the move again over the Blue Ridge Mountains into the Shenandoah Valley. They made their way up the valley to Manassas Junction in the late afternoon of July 20 1861, and then moving position to near Mitchell's crossing on Bull Run River. This is where they captured four union cannons. Dr Pendleton named them Matthew, Mark, Luke and John (the original cannons were returned to the VMI.) This was to be the first battle, but they would see a lot more action over the next four years. The Rockbridge Artillery took part in a total of 32 battles, not all well known, but some of the larger battles were White Oak Swamp, Seven Days Battle, 2nd Manassas Bull Run, Antietam, Fredricksburg, Chancellorsville, Gettysburg, The Wilderness, Cold Harbor and Petersburg Siege.

Over a period of four years a total of 408 volunteers served in the Rockbridge Artillery. On arriving at Appomattox Court House on April 9 1865, Captain Graham surrendered 101 officers and men. This was the largest battery and contained more men than any other company in Lee's army.

The men were very proud of their regiment and kept their name, taking part in many parades and reunions. Fifty two years later, The Rockbridge Artillery fought in the First World War. The people of Rockbridge County still remember the young men who went off to war. 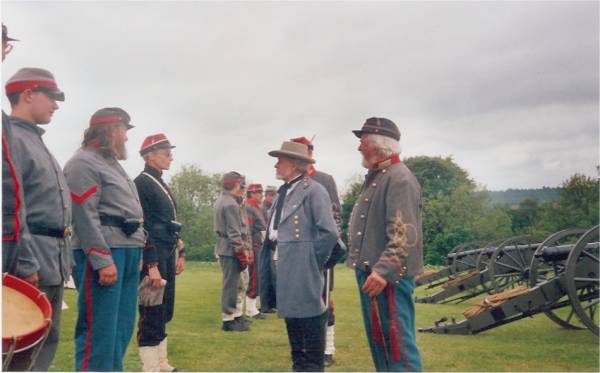 We are re-enactors and do our best to portray The Rockbridge Artillery today, we have about 25 members and take part in 10 to 12 events each year. We take part in "battles" and "living history" at events in England and Wales. We live in white tents and cook over open fires. We also have a family camp for modern tents and caravans for those who prefer more comfort. We are a family society and welcome all. It is not only the men who can go away for the weekend, all the family can join in.

If you choose to stay on the living history camp you must wear authentic costume or uniform of your regiment.

We are always looking for new members as gun crew, standard bearers, musicians, nurses and non-combatants. You must be 16 years old or over.

It is our aim to maintain the traditions of our battery whilst enjoying ourselves and giving pleasure to others.

Why not come along and join us - bring all the family and have a great weekend!